How Long Does A Praying Mantis Live?

The praying mantis is a distinctly identifiable insect. The species found in North America are either bright green or a dull brown in color and have long prominent front legs held out in front of it. In fact, according to National Geographic it’s because of the praying mantis’ legs that it gets its name—the way it holds them out in front of its body resembles the way hands might be clasped in prayer. But that’s not the only interesting fact about this insect. Keep reading to learn more, including how long praying mantises live. 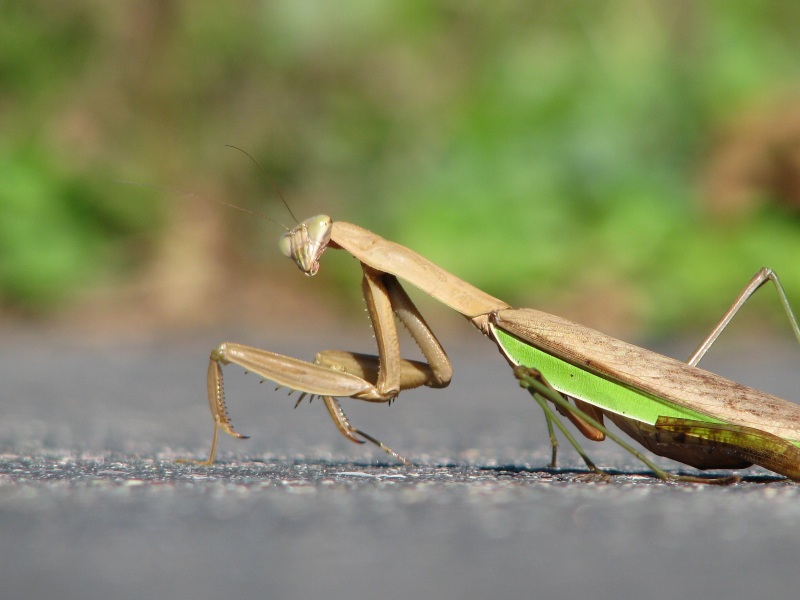 What do praying mantises eat?

Praying mantises eat a variety of insects including crickets, flies, and moths. They’ll also eat certain pests, like the brown marmorated stink bug, making them beneficial insects that aren’t so bad to have in your garden. However, praying mantises do not differentiate between pests and other beneficial insects, and may eat their own kind. Famously, the female praying mantis may decapitate and eat its mate after, or even during mating. Another fun fact: a male praying mantis would be able to complete mating with a female, even after being decapitated.

While you may not think of an insect as a predator, that’s exactly what praying mantises are—and impressive predators, at that. The praying mantis can turn its head a full 180 degrees around. In fact, the praying mantis is the only insect that can look over its shoulder. Besides the two large compound eyes on the top of its triangular head, it has three simple eyes behind that—meaning that it has five eyes in total. In addition, they use their strong front legs to grab prey, holding onto them with spikes that are attached to those front legs. They’ll wait quietly for an insect to wander along nearby, and then strike out with their long and strong front legs. All of these traits help the praying mantis successfully catch, kill, and eat its live prey. In fact, praying mantises don’t just eat insects—they’ve even been seen eating guppy fish.

How long do praying mantises live?

Praying mantises only have one life cycle a year—and it’s an interesting one. After mating, females will lay their eggs in egg cases, referred to asootheca. One adult praying mantis may lay between a dozen and a few hundred eggs inside one of the egg cases.

The eggs will remain ensconced, overwintering within their case. They’ll emerge as nymphs in the spring (sometimes, their first meal will actually be another mantis that has emerged from the same egg case). Their life cycle is sometimes referred to as an incomplete life cycle or incomplete metamorphosis. The nymphs look like adults and will continue to develop through the summer until they reach the adult stage and are ready to mate. The cycle then restarts from the beginning.

Where do praying mantises live?

Generally, the praying mantis can be found among vegetation. The type of vegetation, however, can vary. There are approximately 2,000 species of praying mantis in the world. In the United States, there are roughly 20, with 5 of those being considered fairly common. Where a mantis is found will partially depend on its species. Because mantises are ambush predators, they usually need plant surroundings that they can blend into. That way, they can wait for prey to come along before making their move.

As you can see, there’s more to a praying mantis than just its distinct front legs. In fact, because of their unique attributes, praying mantis are sometimes studied in classrooms or released in gardens to help reduce harmful pests. The egg cases are fairly easy to collect without harming the mantises within. It’s worth noting that if an egg case is collected and kept indoors, it may hatch earlier than it would outside. The Oregon State Extension offers a simple guide for how you can make a habitat suitable for a praying mantis yourself. You can use something as simple as a milk carton or, if you have one handy, a fish aquarium that lets you have an unobstructed view.