How Much Do Bugs Eat?

Bugs have caloric and nutritional needs, just like any other animal. Read on to see how much they can eat. 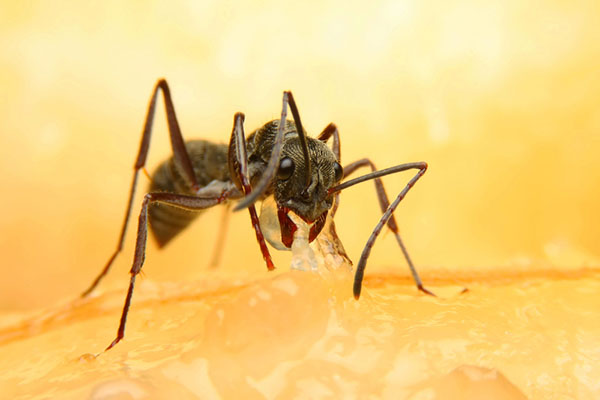 Bugs have caloric and nutritional needs, just like any other animal. Some biting bugs, such as mosquitoes, bed bugs and ticks, prefer blood. Other bugs are content to chew on leaves (fresh or not) and suck on plant sap. Some insects are predators, kings of their own jungles. Others like to share their meals, and, like ants and termites, work together to create feasts that feed thousands.

Whether the question is what caterpillars, ants, ticks or bed bugs eat, the answer comes down to the fact that each bug eats to ensure the perpetuation of the species. Mosquitoes require blood to synthesize the protein needed to lay eggs. Termites have classes of workers dedicated to gathering food for their egg-laying queens. But how much can a single mosquito, tick, bed bug, termite, ant or caterpillar eat? Not surprisingly, the actual amounts of food consumed are small, sometimes microscopic. But remember that insects reproduce frequently and in great numbers. In that light, it really isn’t so surprising how quickly certain insects can inflict harm upon your person, your family and your home.

Amounts of Food Consumed by Insects:

Unlike mosquitoes, all bed bugs require a blood meal to survive. Like mosquitoes, bed bugs gorge themselves on blood. Research shows that bed bugs take between five and 10 minutes to fill up. Bed bugs of all ages and stages of development, from young nymphs to adults, feed. According to the University of Kentucky, a single drop of blood measures .05 milliliters. The average individual bed bug, with each bite, sucks down a fraction of a drop of blood (.005 milliliters). Bed bugs usually feed every three to seven days.

Ticks are lone parasites, attacking as opportunities rise. Like their cousin, the spider, they don’t tend to attack in clusters. But even on their own, some species of ticks can swell to several times their original size. The tick’s next blood meal may not come along for a long time, and ticks, if undetected, can stay attached to their host for days at a time. Each feeding can drain up to three-quarters of a milliliter of blood from the tick’s victim.

Aside from specimens of Formosan “super termites,” individual termites consume cellulose, an essential component of wood, at a rather slow rate. Based on some loose but reasonable assumptions, it would take one termite 3,144 years to eat all the lumber in a 1,000-square-foot home. However, termites live in colonies that achieve average populations in excess of 50,000. The largest subterranean termite colonies eat about a pound of wood per day. Termite colonies can thrive for years, and some species of termite queens can live for decades.

Ants are omnivores. Their diet consists of living and dead plant matter, nectar, carrion and other insects. Ants are also foragers. In addition to what each individual ant needs to consume on its own — up to one-third of its body weight (2 milligrams) — each ant contributes to the food supply of the entire colony. While an ant colony may only eat ounces a day, it can harvest pounds. For example, a colony of army ants has been known to consume anywhere from approximately 38 grams (E. hamatum) of to over 60 grams (E. burchellii) of food in a day.

Regardless of whether they spin webs or actively hunt to find prey, spiders are great for helping control the population of pests that are found in or around your home. Spiders eat insects, other spiders, and even reptiles, rodents and birds. Some species of spiders eat approximately 2,000 insects in a year. However, in captivity, tarantulas can live on being fed three to five crickets one to two times per week.

Caterpillars are something of a paradox. Most caterpillars live one or three weeks at most, but, in that time, they must molt several times before they mature into a moth or butterfly. The insatiable caterpillar can increase its body mass many thousands of times over, a process that can be disastrous for certain trees and food crops. The caterpillar of the monarch butterfly, from its first instar or molt until its last, increases in length from 4 millimeters to almost 50 millimeters. The top job of a caterpillar is to eat and grow. A monarch caterpillar is capable of eating one whole milkweed leaf (four to ten inches in length) in under four minutes.