Being able to identify termites is a good skill to have, especially if you're a homeowner. Termites are sneaky little pests that can enter your home through a crack as thin as an envelope and start causing damage as soon as they find wood in your home's structure. 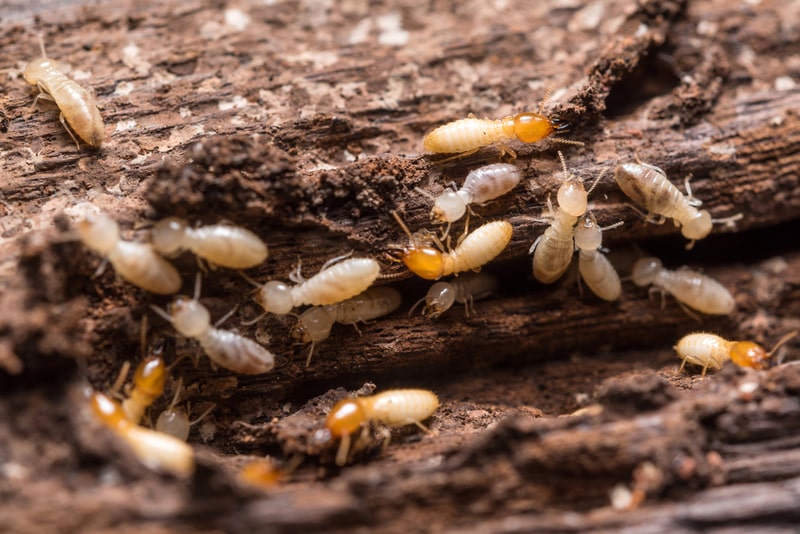 A well-organized termite colony can have more than a million hungry workers consuming over 100 pounds of wood per year, and the average cost of termite treatment and damage repairs is more than $9,000.*

Contrary to popular belief, though, just because a home has wood damage doesn't mean the suspect is always a termite. There are other types of insects who like to feed on or build their homes in wood, like carpenter ants, powderpost beetles and carpenter bees. Since they are similar in behavior to termite, they're not always correctly identified or treated.

One of the most important steps to home protection is insect detection. To do that, it's important to know not only what termites look like but also what other pests that can be confused with termites so you know what you're dealing with and the appropriate removal methods.

What Do Termites Look Like to the Human Eye?

How do you tell if a bug is a termite? Here are some characteristics:

What exactly termites look like also depend on whether you're seeing worker or swarmer termites. You can learn more about the differences here.

Termites are found throughout the United States and are more prominent in warmer climates. And a termite cannot differentiate between a tree in the yard and the lumber used to construct our homes, so you could find them in either place.

You also may have read that termites thrive in the soil. This is true. However some don't require soil at all. Depending on where you live, you may find Subterranean termites as well as those that build their colonies above ground. Either type can be destructive to homes. It's important for termite control professionals to be able to tell the difference in species for proper treatment.

The three most common termites found in the United States are the subterranean, Formosan and drywood.

What Bugs Can Be Mistaken for Termites?

Some bugs cans be mistaken for termites not really based on their looks, but their behavior. Below are some examples.

And while many ant species swarm and have wings, carpenter ants are commonly confused with termites due to their wood-damaging tendencies.

But unlike termites, carpenter ants don't eat wood. They do tunnel and make their nests in it, though, so they're still able to cause damage to your home.

When it comes to home damage, a powderpost beetle rivals what a termite can do. They tunnel into wood as they feed, breaking the wood down into a powder-like material. This all takes place below the wood's surface. Seeing this powdery substance and small holes in the wood are two signs of an infestation.

It's unlikely that you'll see powderpost beetles because they're adept hiders and do most of their work at night. Occasionally, one may be found near damaged wood or near a window, though, as some are drawn to sunlight.

Powderpost beetles don't look much like termites or ants, expect for a few general insect characteristics like having six legs. They are mistaken for termites because of the damage they cause rather than their appearance. But, if you do see one, here's what they look like:

The damage caused by carpenter bees isn't as severe as that of termites, but it can cause cosmetic and sometimes even structural damage. The trouble really starts when the female carpenter bees lay eggs in the wood, forming new populations and increasing the infestations over time. The holes they put in the wood eventually create rot and decay.

As far as identifying carpenter bees is concerned, they look like bumble bees, but their abdomens are smooth and shiny instead of hairy and yellow. They also lack yellow markings on the abdomen.

Once you've figured out which type of pest you're dealing with, the next step is coming up with a removal and treatment plan. While there are certainly DIY methods you can try, the most effective — and long lasting — remedy is consulting a professional.

*Average repairs: $8,566 according to 2018 survey of independent contractors in the Terminix network. Estimated treatment: $1,419. Every home is different; repair and treatment costs may vary.