What You Should Know About Mosquito Larvae

After mosquito eggs hatch in water, they become mosquito larvae. Learn more about these small pests. 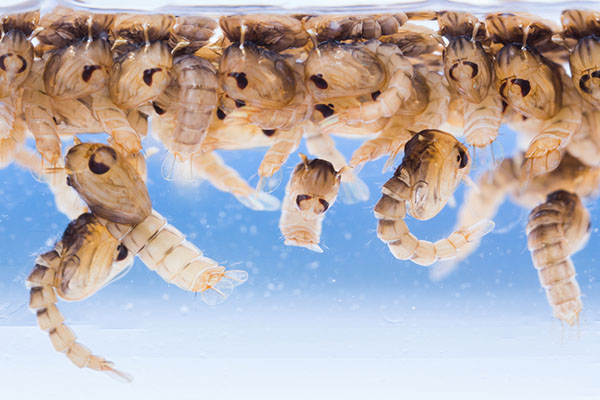 All mosquitoes undergo metamorphosis, passing through four distinct stages during their lives: egg, larva, pupa and adult. The entire mosquito lifecycle takes about a month. Here's a rundown of the various stages.

Egg. After the female mosquito eats a blood meal, she lays her eggs on or near water or damp soil. Depending on the mosquito species, the eggs are laid singly or side by side, sticking together to form rafts that float on the water's surface. A raft can contain anywhere from 100 to 400 eggs.

Larvae. Within a week, the eggs hatch in water, becoming mosquito larvae called "wigglers." A mosquito larva looks like a small hairy worm, less than a 1/4-inch long. It has a hard round head, a soft body, an abdomen with 10 segments and a siphon tube at the tip of its abdomen.

Mosquito larvae live in water for four to 14 days or longer, depending on the water temperature, hanging upside-down near the water's surface. Mosquito larvae come to the surface to breathe through a siphon tube that pokes through the water like a snorkel.

A mosquito larva eats constantly since it needs a lot of energy to grow. Mosquito larvae eat algae, plankton, fungi and other microorganisms in the water. Tiny fan-like brushes filter small food particles toward their mouth. One mosquito species' larvae will even eat the larvae of other mosquitoes.

Mosquito larvae molt four times during this stage, growing larger after each molt. They're almost 1/2-inch long at the final molt.

Pupa. When the mosquito larva molts the fourth time, it becomes a pupa. Pupae, called "tumblers," float near the water's surface. They dive and swim in a tumbling action in response to light changes. Mosquito pupae don't eat or molt. They breathe air and change inside their casing (cocoon) into adult mosquito form. Pupae live in the water for one to four days, depending on the species and water temperature.

Though a mosquito's life cycle is brief, it can cause a lot of damage in that time, inflicting painful bites and potentially spreading diseases. Contact Terminix® today to ensure mosquitoes don't bite into your outdoor time this summer.