What Do Cockroaches Eat?

Cockroaches aren’t very picky when it comes to food. In fact, they’ll eat almost anything. Learn more about cockroaches and their strange dietary habits. 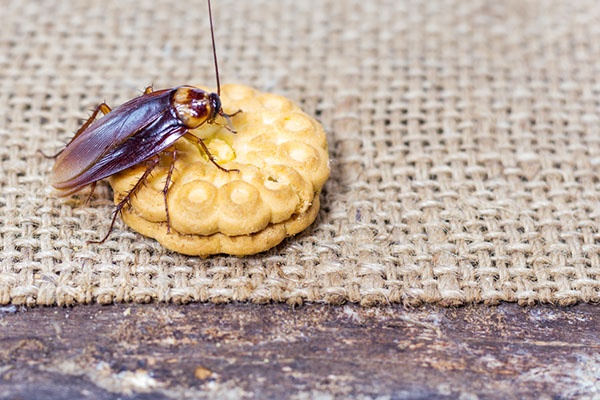 Instead of asking "what do cockroaches eat," it might be easier to answer a question about what they don't eat. Why? Because these scavengers are among the least picky eaters in the insect kingdom.

Cockroaches have three elements working together to make them such voracious eaters. First, cockroaches are omnivores. This means they eat both plants and animals, they don’t care. Second, cockroaches are opportunistic eaters. They'll eat whatever you have in your home, as long as it also meets the third point: that the food be organic (i.e., not metal, plastic, etc.).

What do cockroaches eat first?

Cockroaches will devour most of the same foods you enjoy. After all, humans are omnivores too, so it’s no surprise we share similar tastes. That's why you’ll find cockroaches in the kitchens, food storage and prep areas of homes with infestations.

Now, if your kitchen were a restaurant, cockroaches would definitely order certain types of foods before others. Sweets, starches and animal proteins are a roach's favorite foods. They also like greasy food, cheese or anything that's moldy or fermented. Take extra care to keep sugary foods in airtight containers, clean up your meat prep stations and wipe down your counter for bread and any other crumbs left behind. Cleanliness is a vital part of cockroach prevention.

If your "restaurant" is "out" of their favorite food items, cockroaches won’t just head over to the take-out place down the block. They'll snoop around to see what else is on the menu, taking a taste of this and a bite of that along the way. Decaying matter gets their appetites going, so garbage and waste – even human waste – will serve as gourmet roach meals, as well as a few items in your home such as plants, soap and makeup.

What do roaches eat if nothing else is around?

Despite being omnivores like us, cockroaches see many other items as viable food sources, ones we’d never imagine. For example, when you think of adding a starch element to a meal, potatoes, bread or pasta come to mind. For cockroaches, the starch food group expands to include book bindings, paper, wallpaper paste and the glue on the back of stamps.

For protein, cockroaches view dead insects, animal skin (e.g., the soft inside of leather) and even human hair and fingernails as viable food sources. They’ll also eat their own young if food gets scarce enough. In fact, cockroaches have even been known to bite people, though it's extremely rare and only happens when the infestation has reached cataclysmic levels.

Cockroaches are more likely to pick on calluses, eyelashes, dead skin flakes and fingernails, rather than living tissue. This is because cockroach jaws are rather weak. Their sideways-moving mandibles are great for carrying and chewing morsels of the typical cockroach diet, but these same jaws would have a hard time puncturing your skin. They have an easier time with keratin, a protein found in your nails and hair.

What do roaches eat if there is no food anywhere?

It's rare that such an expedient scavenger like the cockroach would ever run out of food. Outdoors, cockroaches might eat decaying plants and dead wood. In sewers, they make the most out of the waste, sewage and water, especially since many species of cockroach thrive in moist, dark places. But even then, it’s not unheard of for a cockroach to be unable to find food, especially if the infestation has outgrown its resources.

So, what do roaches eat if there's nothing around? Actually, nothing. Many species of cockroach can live up to a month without eating, though only if they have water. That's the type of enemy you're dealing with. Even if you put down roach traps and bait, even if you clean your home, that might not be enough to stop the roaches who are waiting just outside – or inside – your walls. You can't starve them out. Only a pest management professional that can stand behind their guarantee and relentlessly protect your home will give you the ultimate advantage. What do cockroaches eat when Terminix® gets involved? Their last meal.