Why Would You Want a Pet Tarantula?

For those with arachnophobia, there’s likely nothing appealing about intentionally owning one of the world’s largest spiders as a pet. Though the average adult tarantula grows to be just 4.75 inches in length, according to National Geographic, some species of this creature can grow to be more than 11 inches in length. However, as terrifying as some may think tarantulas are, these creatures have become a relatively popular pet throughout the world. But when did this common practice start? 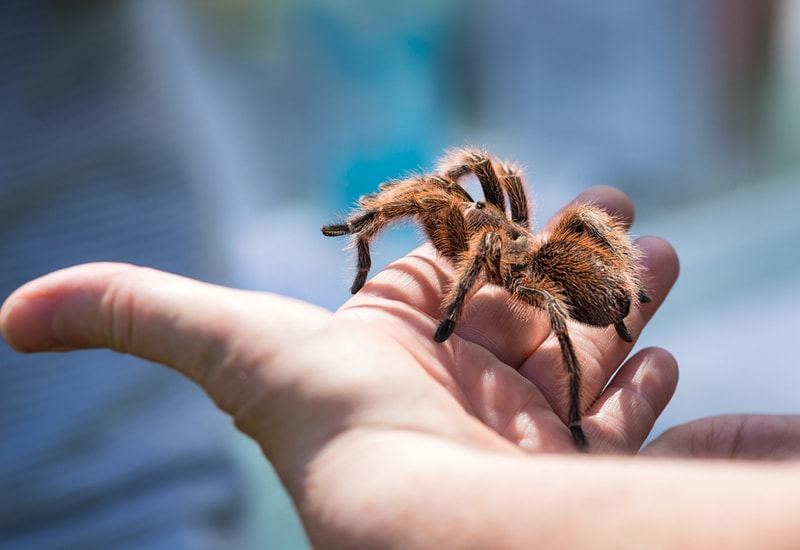 The History of Pet Tarantulas

As the National Park Service notes, the name tarantula originated in Italy, after a town called Taranto. Within this town, a myth emerged that stated that anyone bitten by a similar spider, the wolf spider, would fall into a hypnotic state, called tarantism, and be forced to dance provocatively. This myth continued to spread for centuries, and some believe that early Europeans who immigrated to the United States brought this name with them to describe the large, black, hairy spiders found across the southwestern United States.

It wasn’t until the 20th century, however, that these seemingly menacing creatures started to be seriously considered as pets. Since then, tarantulas have become relatively popular household pets, with many species native to South America and Central America, like the pinktoe tarantula and Honduran curly hair tarantula, finding homes with American families. . But before jumping into this pet-owning trend, it’s important to consider the major pros and cons of having a pet tarantula.

While it may seem like any spider that grows over an inch long is large, in comparison to dogs, cats, and most rodents, tarantulas are a relatively small pet. Dr. Keller recommends keeping these creatures in a 20-gallon aquarium, so their required enclosures rarely take up more than a few square feet of space. This makes it easy to keep a pet tarantula contained to a small area of your home.

Unlike other common pets, like cats and dogs, Dr. Keller suggests that pet tarantulas should eat just a few times a week. Likewise, according to an article published by faculty from the University of Kentucky’s Departme nt of Entomology, the soil in their cage only needs to be refreshed about once a month. One of the only forms of routine care these creatures require is a supply of fresh water, but even then, these c reatures do not consume much water. This makes it easy for young kids and busy teens to care for a pet tarantula.

Though their large, furry bodies may suggest otherwise, tarantulas are considered to be calm and quiet pets. Most species of tarantulas are considered to be docile, especially the Chilean rose-hair, the Mexican red-knee, and the Brazilian black tarantula. They are not capable of making noise and, according to Dr. Keller, these creatures prefer dark, quiet spaces, so they do not need to be placed near a window or in a room with a lot of natural light.

Though tarantulas are not fatally venomous, physicians from the University of Florida Health note that tarantula bites can cause irritated, itchy, painful bumps, which could last for weeks. When threatened, they may also retaliate by rubbing their hind legs across their body and flicking “thousands of tiny hairs toward the threat.” It is these sharp hairs that can pierce human skin and cause painful symptoms. Fortunately, tarantula venom is not considered to be dangerous to humans, but it’s still best not to handle tarantulas unless absolutely necessary..

While you and your kids may not find tarantulas to be terrifying, not everyone agrees. Friends an d family members with arachnophobia may be shocked to find a large spider living within your home’s social spaces. It’s advised to keep a pet tarantula away from all social rooms of your h ouse to avoid scaring any guests.

Though adult tarantulas are not big eaters, when they do eat, Dr. Keller notes that their diet primarily consists of a number of creepy crawlies, like crickets, worms, and cockroaches. Insect-lovers may be happy to store these pests around the home as tarantula food, but the same cannot be said for all homeowners. If you&rsquo ;d rather not keep small populations of pests inside or near your home, it’s probably not a great idea to adopt a pet tarantula.

Preventing Tarantulas in Your Home

Though man y homeowners in the United States have adopted pet tarantulas, not all homeowners want a stray tarantula living in their homes. While these creatures live in a wide range of habitats in many western states, those living in southern stat es as far east as Missouri, Arkansas, and Louisiana are most likely to find a tarantula wandering near their home.

When living outside, tarantulas can often be found “under rocks, in ab andoned mouse burrows, or in other sheltered areas,” as entomologists from the Oklahoma State University Cooperative Extension office report. In fact, the Colorado State University Extension off ice assures homeowners that tarantulas “do not enter homes, and females move only a few feet from their burrows.”

However, there are a few steps entomologists from the University of Arkansas Cooperative Extension Service recommend taking to prevent all species of spiders from entering your home:

While no t everyone will want to adopt a furry tarantula as their next family pet, these long-living creatures can be easy, unique pets for kids of all ages.

Next > Don't Squish That Wolf Spider