What are Cat Fleas?

The cat flea is the most common type of flea, which is usually found on dogs and cats. Discover more information about cat fleas and how to remove them. 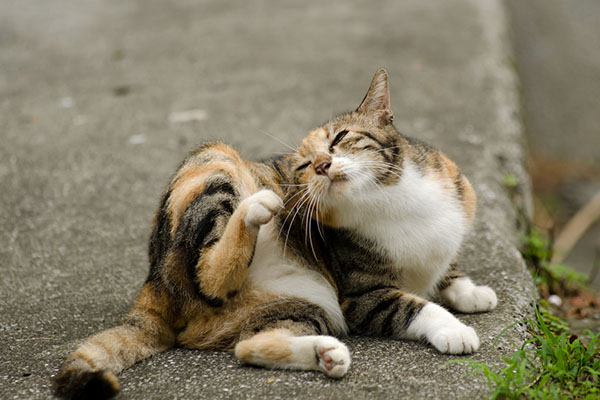 The most common domestic flea is the cat flea, Ctenocephalides felis. This is most likely the flea you'll find on your dog or cat. Adults of this species, unlike many other fleas, remain on the host for most of their adult life. The dog flea, Ctenocephalides canis, is similar in appearance, but is rarely found in the United States. Cat fleas are commonly found on both cats and dogs in North America, while dog fleas are found in Europe. Cat fleas will also use other animals such as rats, mice, squirrels and birds as their host. The two species are distinguished by a slight difference in their anatomy, which is detectable only under high magnification.

Cat fleas can live without food for several months, but the female flea must have a blood meal before she can lay eggs. Amazingly, up to 4,000 eggs can be laid on the fur of the animal just from one female flea during her lifetime.

These fleas develop through a four-stage life cycle: egg, larva, pupa and adult. The entire life cycle can be as short as two to three weeks, or as long as a year depending on environmental conditions such as temperature and humidity.

Eggs: Cat flea eggs are laid at the rate of up to one egg per hour. They are oval, smooth, and very small in size - about 0.5 millimeters. Due to their dry, smooth surface, the eggs easily fall out of the animal's hair. Though otherwise visible, the white eggs are nearly impossible to see against surfaces such as carpet, bedding and lawn. It is here where the eggs will remain until the larvae emerge.

Larvae: Within two days of egg laying, worm-like larvae hatch from the eggs. They range from 1.5 to 5 millimeters in length. This stage lasts five to 15 days depending on environmental conditions. Larvae lack eyes, legs, are covered with few hairs, and possess dark guts that are visible through their thin translucent outer covering called the exoskeleton. Cat flea larvae feed on almost any organic debris in the floor covering, but their main diet is dried adult cat flea fecal matter. Adult flea feces, also known as "flea dirt," consists of relatively undigested blood which dries and falls from the pet to serve as food for the newly hatched larvae.

Pupae: Before becoming adults, the cat flea larvae spin silk cocoons in which they will develop. Because of the sticky outer surface of the cocoons, dirt and debris are attracted to them and provide camouflage. The pupae remain in the cocoons until they have fully developed into adult fleas. The adults can survive inside the pupa for up to a year before they emerge.

Adults: Adults are stimulated to emerge by vibration or carbon dioxide which is expelled by warm-blooded animals through normal breathing. Considerable rises in temperature and humidity can also be a trigger. The adults are about 1 to 3 millimeters in size, reddish-brown to tan in color, wingless, and have laterally compressed bodies, almost making them appear as if they've been flattened. They possess powerful hind legs which allow for running and jumping through hair, fur, and feathers. The adult stage of the cat flea is the only stage of their life cycle where they actually live on the host animal. The adults usually live four to 25 days.

Cat fleas can cause a variety of concerning medical conditions. Although rare, they are capable of transmitting diseases such as murine typhus and the plague to humans. There are varied allergic responses to their bites depending on the sensitivity of the host animal. Cat fleas can also serve as an intermediate host to an intestinal parasite known as the dog tapeworm. Perhaps one of the most common conditions caused by these pests is flea allergy dermatitis (FAD). Some animals are very sensitive to cat flea bites. Excessive biting and scratching can cause hair loss, hot spots (areas of bare skin where the hair has been bitten or scratched off by the pet, becoming red and inflamed i.e., "hot") and lead to an infection.

Fleas can be detected by the behavior of your pet. If your pet begins to bite and scratch excessively, this might suggest the problem is flea bites. If you notice loss of hair or sores on your pet, they may have already developed FAD. Early detection is the key to minimizing suffering. Although fleas can serve as disease vectors, most people take action due to the annoyance of the itching and biting of the fleas, rather than for health reasons.

Trying to control cat fleas with over-the-counter products and tools can oftentimes seem futile. Considering that pupa containing developing adult fleas can remain in lawns and carpets for extended periods of time unchallenged, you may manage to kill most of the adults only to have new recruits enter the battle when the adults emerge. It's a vicious cycle. Terminix pest management specialists are trained and have the correct products and equipment to tackle even the worst cat flea infestations. If you suspect you have a flea problem, call Terminix and ask for a free evaluation.