While all bees buzz, they don’t all look the same. In fact, some bees may not even look like “bees.” Learn how to identify different bee types. 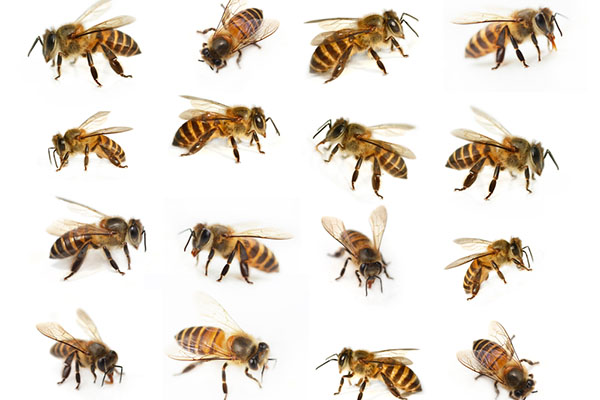 Bees are flying, vegetarian insects that collect pollen and nectar as food sources. The hairs on their bodies make it easier to collect this pollen, which is why almost all types of bees have hairy bodies. Bees are closely related to wasps and ants, even coming from the same order of insects, Hymenoptera. They are best known for their role in pollination and for producing honey and beeswax. Bees are found on every continent except Antarctica, and in every habitat on the planet that contains insect-pollinated flowering plants. Both bees and wasps also sting, but most bees are less aggressive. Only female bees have stingers.

Depending on the region you find them, honey bees differ in color. Most commonly, you will see a honey bee that has black stripes alternating with bands of amber to brown hairs. Still, some honey bees can look almost all black. Honey bees measure around one-half to three-fourths of an inch. Most times, when you see beekeepers with large wooden boxes, these are hives containing honey bees. Honey bees were brought over by early European settlers and are not native to the United States.


What do bees look like if they aren't honey bees?

Other than honey bees, the two most common bees you will see are bumble bees and carpenter bees. Bumble bees are large, fuzzy bees with round bodies covered in hair, or fur. Typically, they will be black and yellow with alternating "warning" bands. Some species of bumble bee are brighter or darker in color, depending on where they live. While they are twice as large as a honey bee, bumble bee nests are fairly small and are typically found in the ground. Honey bee hives can have between 10,000 and 50,000 bees, while a bumble bee colony can have as little as 50 bees inside. Unlike honey bees who die when they sting, a bumble bee can sting multiple times. Fortunately, these bees are not typically aggressive.

Carpenter bees are about the same size as bumble bees, but fly much faster. Their erratic flight patterns can resemble a hummingbird. Carpenter bees are not as hairy or colorful as bumble bees. They have a distinct, shiny black body. They also have a distinctive black dot on the top of the mid-section of their body called the thorax. Carpenter bees aren’t social bees, meaning they nest alone. They burrow nearly perfectly round holes in wood to form their nest. If you see holes in porches, decks, patio covers, eaves and other wood sources around your property, these might be carpenter bee holes. The entry holes are typically just big enough for you to put your finger in, not that you should. You might also find soft, sawdust at the base of the hole. This comes from the bee digging the hole out. They don't eat the wood, but rather, chew through it. Males of this species are very aggressive. When infesting structures, they may cause alarm by "dive-bombing" humans and animals that come close to the nest the male is protecting. Fortunately, only the females have stingers, and they are seldom aggressive toward humans.

Bee hives and nests may need to be relocated if they present a threat. Most often, they are just there to pollinate some flowers and collect honey. Call Terminix® with any and all of your bee concerns, even if it’s just to ask, "What do bees look like?" if you're still not sure.