We’re all accustomed to the sight of honey bees in the spring and summer, busily making their way from flower plant to flowering plant and seeking nectar to produce honey. But what happens to honey bees in the winter? 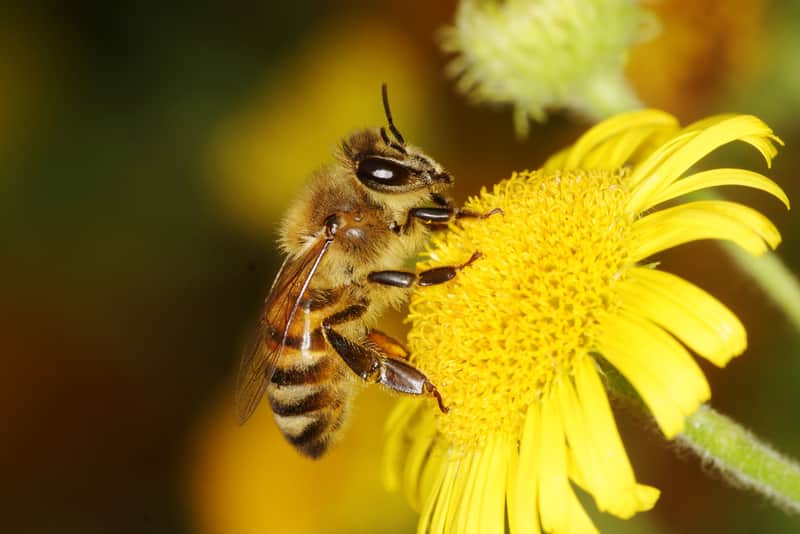 How Do Honey Bees Survive Winter?

Though most bees and wasps do hibernate during the winter, honey bees can survive cold winters. In the insect world, there are multiple strategies that insects, like bees, can use to survive winter, which include “hibernation” and diapause. In some bee species, only the queen survives, reemerging in the spring from a protected area to establish and develop a new colony for the summer. But honey bees remain active throughout the winter, despite freezing temperatures and the lack of flowers on which to forage. These honey bee species ride out the winter by creating their own heat source.

Stated simply, in the winter honey bees must stay warm and must have food to survive. Staying warm requires food and energy in the form of honey, and if the colony exhausts its supply of honey, it may freeze to death before spring. This is one of the reasons why honey bees work so hard during the warmer months to collect nectar, process it and then store large amounts of honey.

As summer gives way to fall and their nectar or other sugar sources disappear, honey bees begin to settle in for the winter. When temperatures start to fall, the bees start to cluster in their hive. Meanwhile, the queen stops laying eggs in late fall and early winter since food stores are limited.

To insulate the colony as outside temperatures drop, the honey bee workers form a cluster around the queen and the brood (immature bees, from eggs to larvae) to keep them warm. The bees in the cluster keep their heads pointed inward, and the bees on the inside of the cluster feed on the honey that’s been stored in the hive for the winter. Those on the outside of the cluster insulate their companions inside the sphere of honey bees.

When the temperature reaches about 57 degrees Fahrenheit, the cluster tightens and the bees remain relatively motionless. The combined body heat that’s generated (more details below) by the bees lined up side-by-side in the outer ring of the cluster is sufficient to keep the colony warm.

The Buzz About Honey Bees

As temperatures continue to drop, the worker bees start actively generating heat within the hive. They begin to flex the flight muscles located within the thorax of their bodies. But their wings don’t move. Instead, this vibration raises each bee's body temperature. With thousands of bees vibrating in this manner, the temperature at the center of the cluster warms to a cozy 93 degrees Fahrenheit.

During warmer spells, the entire cluster will move within the hive, positioning themselves around fresh supplies of nectar or other sugar sources.

National averages vary, but honey produced per colony ranged from 31-58 pounds in 2016. This is approximately two to three times the amount the overwintering colony will need survive. An especially large and thriving colony can produce up to 90 pounds of honey. In other words, worker bees spend much of their lives producing a honey surplus. Beekeepers harvest this surplus, making sure they leave the bees enough of this precious substance so they can survive the winter.

While most of us love honey and recognize the role that honey bees play in pollinating many of the plant foods consumed by humans, no one really wants a hive of bees around or inside their house. If you’re dealing with an influx of bees, don’t hesitate to reach out to a beekeeper for help. If you notice bees in your home, contact Terminix® and we'll help you find a solution.