While there are more than 12,000 known species of ant, only a handful are a threat to your home’s privacy. Learn more about the different types of ants. 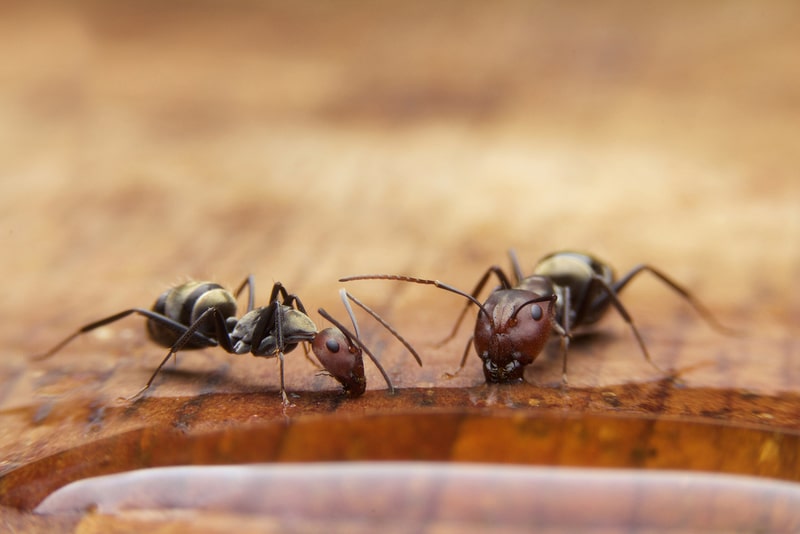 Ants occur in wide variety over all regions of the world. They have a vast number of different species. In fact, more than 12,000 different ant species have been identified. But while their ranks are large, only a small fraction of these species are considered home invading pests.

Determining the types of ants in your home depends on a number of factors, including appearance, habitat and the region where you live. An ant's body can have one or two nodes, or "humps," on its thorax which helps identify the species. Species vary in both size and color as well. Some ants can bite and some can sting, while others, such as the fire ant, can both bite and sting. Below is a list of ant species commonly found in or near homes, according to the Mallis Handbook of Pest Control by Arnold Mallis.

Related: How Much Can An Ant Lift?

Worker ants are about 2.5 to 3 millimeters long with two nodes. Acrobat ants color varies from yellow-brown to brown and red-black to all black. They nest outside, primarily in moist wood and inside damaged wood structures, and sometimes in foam panel insulation. When threatened, worker ants of this species will lift their abdomens above their heads, resembling a scorpion. As they run with their abdomen held in the air, it gives the appearance that they are tumbling, hence the name, "acrobat ant." These types of ants are aggressive and will sting, although they are not frequent indoor invaders. They are commonly found throughout the Eastern United States.

Argentine ants are about 2.2 to 2.8 millimeters long and have one node. Their color varies from light to dark brown. Outdoors, they nest in a variety of areas throughout the winter and in shadier spots during the summer. Indoors, they are sometimes found in wall insulation or voids. If stepped on, workers emit a musty smell. These ant types do not have the ability to sting. They are most commonly found throughout the Southeastern United States, California and Hawaii.

Asian needle ants are about 5 millimeters long and have one node. They are brown-black with dark orange mandibles, and mostly nest outdoors in shaded areas with high moisture. This species is less aggressive to neighboring ant colonies than other ant types. It will sting if pressed against human skin or trapped in clothes. This happens most often during swarm season, which is between July and August. Its sting can be painful and sometimes causes a welt. A small number of cases where humans were stung resulted in anaphylactic shock. It is most commonly found in Alabama, Georgia, South Carolina, North Carolina, Tennessee and Virginia.

Multiple variations of carpenter ants exist across the United States. These types of ants rank high as structural pests. Due to such large variety, their physical description can be broad. The average length of workers is between 6 and 13 millimeters. Carpenter ants don't actually eat wood, but rather excavate it in order to create nests. The primary nest of these ants is typically outside, in trees or lumber. Indoors, they prefer roofs and woodwork near moisture. Homes in woodlands are at the most risk for structural damage. Some species are aggressive and will sting if their nest is disturbed.

Crazy ants are 2.2 to 3 millimeters long with one node. They are black-brown with extremely long legs and antennae. These types of ants are non-discriminatory nesters, forming colonies in moist or dry environments. Outdoors, they nest in plants, soil, heavy vegetation, mulch and garbage. Indoors, they can be found under carpets, in wall voids and in houseplants. Crazy ants do not have stingers, but will move around sporadically if disturbed, thus earning their name. They are spread throughout the United States and are especially common along the Gulf Coast. Other common species in this subfamily include the Caribbean crazy ant (Nylanderia pubens) and the robust crazy ant (Nylanderia bourbonica). All are considered major home invaders, the latter two primarily existing in Florida.

The average length of this ant is about 1.6 millimeters. They have one node for their body and are medium to dark brown in color. They are commonly found in areas near people, and nest outdoors by grass edges, under objects on the ground and in parking lots. Indoor nests are sometimes found in bathrooms and kitchens. Dark rover ants have a preference for sweet liquids. Their large colony size can make them a nuisance, although they do not sting. They are commonly found in Florida, southern Georgia, Alabama, Mississippi and Louisiana. They have also been reported in South Carolina, Arkansas, Texas, Arizona and Nevada.

Workers are about 4 to 5 millimeters long. These ants have two nodes and can vary in color, although most are a light reddish-brown. During warmer months, this species of ant forms nests in a wide range of outdoor habitats including gardens, lawns and shrubbery. They may form nests inside during cold months, particularly under bath tubs, water heaters or other warm areas with moisture. European fire ants are aggressive and can produce a painful sting when disturbed. Infestations of these ants have been reported in New York, Massachusetts, Rhode Island, Vermont, New Hampshire, Maine and Canada.

Field ants vary in size from 4 to 8 millimeters long. They have one node and also come in a variety of colors including black, brown, yellow-brown and mixed red. This species of ant forms nests mostly in open areas of soil, dead wood or greenery. They are not commonly found indoors. Field ants have stingers and the ability to spray formic acid, which can induce a small amount of pain. They are common in the Northeast and Midwest United States.

Many other ant species exist. They are largely considered pests because of their ability to produce large colonies, and their habit of foraging for food indoors. Some are more of a threat than others. Ants have the ability to transmit disease organisms through the contamination of food or sterile objects. Their stings can be painful and, in rare circumstances, lead to anaphylactic shock. Carpenter ants also have the ability to cause damage to wood structures.

Are you concerned about ants in your home or yard? Identifying the types of ants you are dealing with can be a challenge. Treatment can vary depending on the species. For proper identification and a comprehensive solution, contact Terminix. Get started today and save $50¹ on a pest control plan².