Does the Dung Beetle Hold the Key to Better Organic Farming

You probably think of a dung beetle as a bug rolling a large ball of elephant dung. But some scientists think more highly of it. Find out what their theory is. 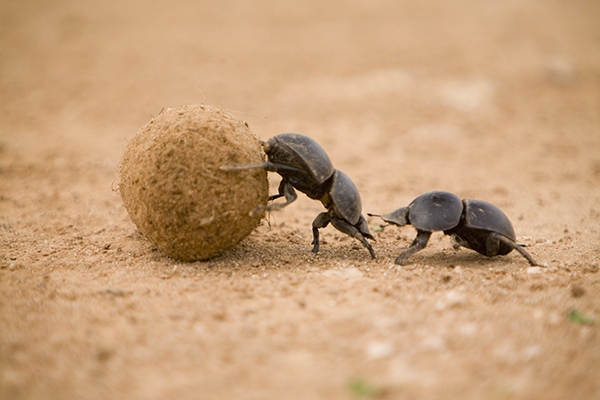 Some scientists believe the dung beetle may be the face of organic farming’s future in the United States.

When you picture a dung beetle, you probably think of it rolling a large ball of elephant dung across an African landscape. What you probably don’t imagine are the beetles working their magic in the scat of wild pigs and deer in North America or making a meal out of cow patties. But that’s exactly what they do, according to studies.

Now scientists are trying to determine if the dung beetle — sometimes called “nature’s pooper scooper” — is helping farmers around the world eliminate problems naturally and organically. Let’s take a look at how these nocturnal feeding insects may be doing it.

Where there are cows, there are cow pies. The same goes for other livestock like chicken or pigs, too. It’s just a natural fact. And while you probably don’t think about cow waste while enjoying a glass of milk or a hamburger, it is a part of the process.

Unfortunately, an excess of cow patties has negative effects. Aside from the obvious unpleasant smell, cow manure can attract parasites like worms and flies. In addition, cows won’t graze in pastures covered in dung. (Who can blame them?)

Perhaps worst of all is the fact that a lot of cow pies can result in heavy runoff during rains. The literal trickle-down effect is that the manure is washed into nearby creeks, streams and rivers, which become polluted as a result.

That’s where our friend the dung beetle comes in. Dung beetles are commonly thought of as insects that roll balls of manure. However, many species actually take the dung underground into tunnels to feed their young. When the dung beetle does this, it reduces the amount of exposed manure that can attract parasites or be washed into waterways. It also leaves cattle more room to graze.

In the U.S., the use of the dung beetle to clear pastures is gaining popularity, especially in Midwestern states whose economies rely heavily on agriculture. Currently, the biggest challenge is finding beetles who can survive cold winters, and scoop poop year-round.

But taking advantage of the dung beetle’s food source isn’t a new idea. Farmers in Australia have been using the beetles since the 1960s. You see, cattle weren’t native to Australia, so the country’s insects couldn’t break down the manure when cows and sheep were introduced. To control the problem, they imported dung beetles. That’s right. They imported bugs. Way to put your name on the map, dung beetle.

The benefits of the dung beetle and organic farming may not stop with clearing pastures and reducing water pollution. Recently, scientists have been studying dung beetles to see if they can decrease E. coli contamination in food.

How, you ask? Well, before your produce hits the supermarkets, it’s just a plant growing outside, right? Well, those fruits and vegetables have a tendency to attract hungry woodland creatures like deer, birds or wild pigs. And what do woodland creatures leave behind after they eat? Scat, of course.

That may seem like no big deal. But unfortunately, the droppings that these animals leave behind can sometimes be infected with E. coli. And that is a big deal. As we saw earlier in 2016, E. coli outbreaks can have a widespread effect, sometimes on an almost national scale. Worse yet, some strains can lead to death.

Enter the dung beetle. Many species of these beetles eat animal scat, live in it and lay eggs in it. Scientists want to know if the beetles’ interactions with E. coli–infested scat could reduce the chances of E. coli being transferred to the produce.

While this research is still relatively new, studies are yielding positive results. When the beetles break down the animal dung and take it to their underground tunnels, it limits the amount of contact a plant might have with E. coli by reducing the concentration of the bacteria found in the soil. This, in turn, decreases the possibility of a plant being exposed to a strain of the bacteria.

Clearly, scientists believe the dung beetle may have a lot of potential when it comes to changing the world of organic farming. And we bet you’ll never think of these little poop-scooping beetles the same way again.