It’s common knowledge that bees serve as essential pollinators for much of the world’s food and flowers. Hornets are another type of insect that helps pollinate some of the plants found in the United States. And because bees make honey in addition to pollinating plants, you may be left to wonder, do hornets also make honey? 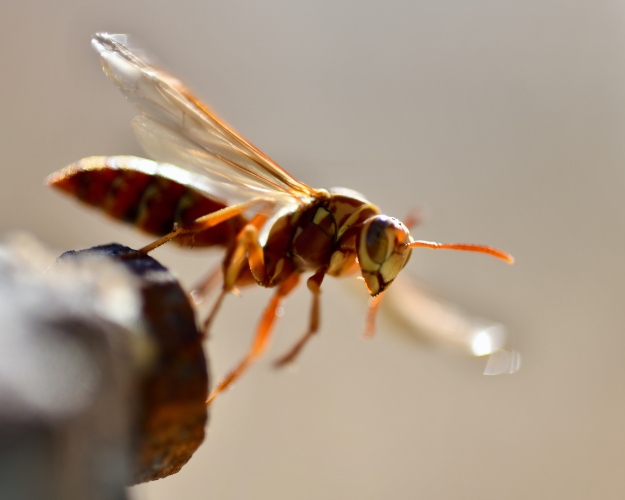 The University of Arkansas’s Division of Agriculture states that “honey bees perform more than 80 percent of all pollination of cultivated crops.” However, these beneficial insects are not the only insects that pollinate crops.

First Things First: What are Hornets?

Considering hornets are a subset of wasps, it can be difficult to tell the difference between a hornet and a different species of wasp. Of the 20 species of hornets that exist in the world, only one true hornet species, the European hornet, is present in the United States. According to the University of Maryland Extension, European hornets are 3/4 to 1 3/8 inches long. and have brown bodies that are patterned with yellowish-orange stripes.

When it comes time to gather food for their colonies, baldfaced hornets will often seek out spiders and small insects to feed their larvae. However, in a manner similar to bees, hornets do collect honeydew and juices from plants. Unlike most bees, however, hornets and wasps do not have hairy bodies, which usually allows bees to carry greater amounts of nectar and pollen back to their hive. Instead, the hairless nature of hornets’ bodies means these pests can only carry a limited amount of liquid du ring each trip.

The Dangers of Hornets

For homeowners living in the U.S. hornets may pose a risk to you and your family. Unlike bees, which are capable of stinging only once before dying, European hornets can sting multiple times. The Mayo Clinic mentions that while severe reactions to hornet stings are rare, stings from these pests can cause “redness, itching, stinging, or minor swelling.” If you or a family member receives a sting from a hornet, The Mayo Clinic recommends that you remove the stinger, wash the area with soap an d water, apply a cool compress, and apply 0.5 or 1 percent hydrocortisone cream to the area several times daily until symptoms go away.

However, while the presence of hornets around a home c an feel daunting, the University of Maryland notes that if the hornet nest “is in an inaccessible location or the hornets do not present a problem,” it’s best to leave the nest alone to avoid irritating the colony. Come winter, the majority of hornets in a hive will die once the colder weather arrives. The ones that do survive, typically the new, overwintering queens, will abandon the nest and search for a new overwintering location. Unlike some insects, which reuse old nests year after year, hornets do not inhabit old paper nests. For this reason, it’s best to leave the hornet nest unbothered until winter arrives. The University of Maryland also recommends turning off porch lights at night to help avoid attracting hornet s to your home.

Are you interested in learning more about European hornets? Visit our blog to learn more about hornets and other fascinating pests.