Are Garter Snakes Poisonous? It’s Time to Shed the Falsehoods

Have you ever happened upon a small snake slithering through the grass? There are more than 50 species of snakes living in the United States, and while a number of dangerous snakes can be found sneaking around homes, many snakes found in backyards belong to the garter snake species, which don’t pose a threat. Garter snakes are one of the most common snakes found in North America and they appear throughout most regions of the United States and Canada. In fact, many are sold and kept as pets. 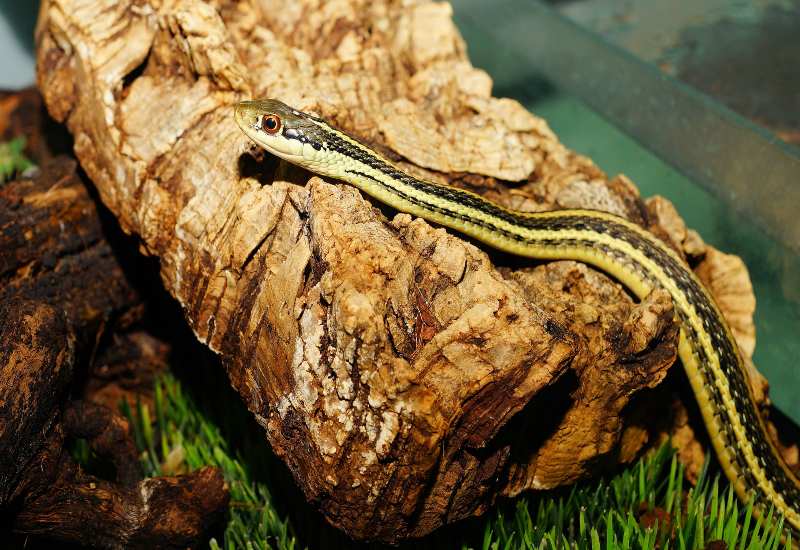 These Garter snakes prefer wooded areas, especially those located close to streams or pools of water. This provides easy access to their preferred meals of fish and amphibians. Garter snakes often measure between 15 and 35inches long, though some can grow to be over 5 feet long. Most are gray, brown, or black and have three long, yellow or green stripes that run the length of their body, but these colors differ slightly among the 35 species of garter snakes. Like all snakes, garter snakes use their forked tongues to sense their prey. However, garter snakes can be identified by their two-colored tongues, in which the base is red and the tip is black.

Considering they spend the winter hibernating, a potential run-in with a garter snake will most likely occur during the late spring and summer. These pests are also primarily active during the warmer hours of the day, like the afternoon, which is when they leave their dens to hunt and bask in the warm sunlight. Before spending time outdoors during the spring and summer months, it’s important to know how to identify these snakes and know what kind of health risks they may pose.

Though a popular household pet, many still wonder if garter snakes are poisonous. The answer is, technically, no. First, poisonous means if you eat something poisonous, it will make you sick. Venom, on the other hand, is a toxin produced by an animal that will make your sick. When the teeth of venomous snakes come into contact with human skin, venom flows from the snake’s modified salivary glands and into the tissue or bloodstream of their prey. This venom contains a variety of toxic proteins and enzymes that can trigger intense reactions in their prey. However, most species of garter snakes do not contain the venomous neurotoxin needed to inflict these symptoms in humans.

That being said, some species of garter snakes, like the common garter snake, do have the necessary toxins in their saliva to make them venomous. But fortunately for humans, the venom from these bites causes little more than a slightly irritated, swollen area around the puncture wound. Having an allergic reaction to a bite from a garter snake is rare, though the Mayo Clinic recommends that anyone experiencing symptoms of anaphylaxis, which includes hives, nausea, vomiting, and dizziness, should “immediately call 911 or your local medical emergency number.”

The most significant damage a bite from a garter snake can cause is an infection. This can occur if bacteria from the snake’s mouth gets transferred into your skin tissue or bloodstream. Likewise, if a garter snake bite is not treated properly in conjunction with the guidelines listed by Dr. Troy E. Madsen, MD from the University of Utah, the bite can become infected and cause other unwanted health issues.

Though garter snakes will use their sharp teeth to catch prey, it’s very unlikely these pests will choose to bite a human. They typically only lash out at humans when they are provoked or feel threatened. Many garter snakes will also release a foul-smelling musk just before lashing out at their victim. This musk does not pose any physical harm to humans, but it can leave behind a skunk-like stench that lingers on their victim’s clothes, hair, and skin.

So, are garter snakes poisonous? No, they’re not considered poisonous to humans. With the exception of a few species, which are capable of causing anaphylaxis in certain individuals that are bitten due to their mild venom but are still not considered dangerous to humans. And though the presence of these pests may be unsightly for some homeowners, garter snakes can provide a great benefit to the health of your lawn and garden. This may be why some people call them garden snakes. Garter snakes will feed on annoying garden pests, like snails, leeches, slugs, and grasshoppers. They may even eat larger pests like mice, frogs, and salamanders, though some of these pests can serve their own beneficial purpose in a garden.

Though garter snakes are not poisonous, people are still at risk of receiving bites from venomous snakes like rattlesnakes, copperheads, and cottonmouths. If you ever receive a bite from a snake, symptoms like nausea, vomiting, and labored breathing may be signs that you were bitten by a venomous snake according to the CDC. They recommend seeking medical attention immediately.

Some homes are more susceptible to hosting snakes than others, especially those located near grassy fields or heavily wooded areas. The most obvious way to know if your lawn is hosting garter snakes is if you spot one slithering around your yard.

While Terminix does not treat, trap or remove snakes, contact us for more info on our service offerings.