All About Yellow Jackets, Wasps And Hornets

If you’ve just been stung, the last things on your mind are the variations in anatomy, behavior and diet of bees, wasps, yellow jackets or hornets. But some elementary entomology can go a long way. 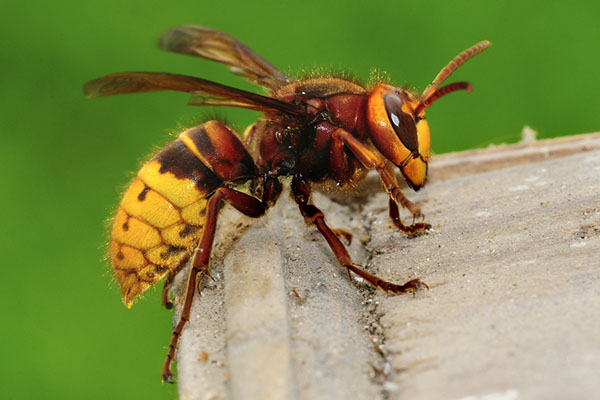 If you’ve just been stung by a buzzing winged insect, the last things on your mind are the variations in anatomy, behavior and diet that differentiate the likely culprit: a bee, wasp, yellow jacket or hornet. But some elementary entomology can go a long way toward ensuring the safety of your family, your security and your peace of mind.

All bees and wasps are members of the scientific order Hymenoptera. Regarding population and diversity of species, only the Coleoptera (beetles) and Lepidoptera (butterflies and moths) are more numerous than bees and wasps. Scientists estimate there are more than 150,000 individual species of Hymenopterans. From the humble honey bee to Dicopomorpha echmepterygis, a wasp that measures a fraction of a millimeter and is the smallest known insect in the world, Hymenoptera are widely distributed and have long had a complicated relationship with humans.

Bees are, of course, important pollinators of flowering plants. If not for bees, who rely upon pollen and nectar for their daily nutrition, we would not be able to enjoy tangerines, coffee, cherries, figs, almonds, tomatoes and countless other farmed foods. Humans have also built entire industries around honey, beeswax, royal jelly and other relevant bee-derived products. Unfortunately, Hymenopterans’ attraction to sweet substances helps to explain why many a picnic and barbecue have been ruined by their sudden appearance. Spilled soda, ice cream and sugary fruits can all prove irresistible to bees. Since these treats tend to be ones we savor in the summer months as bee and wasp populations are peaking, humans and bees may be seeing more of each other.

Unlike bees, however, wasps are also carnivorous. Many wasp species are important predators of other insect pests. The aptly named cicada killer wasp is a specialized hunter whose behavior helps to protect trees and shrubs that may become overpopulated with sap-sucking cicadas.

Wasps and bees are social organisms and form colonies around queens. Bees build hexagonal cells out of a waxy substance they produce (only worker bees have this ability). In the wild, these combs are most commonly found in places like the hollow of a tree. Closer to home, bees will occasionally take advantage of something like a crack in an exterior wall and nest there.

Wasps construct their similarly honeycombed hives out of scavenged materials: leaves, stems, bark and even mud. The so-called paper wasp chews up plant material and regurgitates a kind of paper. If you see black and yellow insects flying around a grayish-brown comb hanging from your porch roof, you're dealing with wasps, not bees.

Yellow Jackets resemble ants more than bees in their urban planning. Many yellow jackets will nest underground, often in a burrow abandoned by a previous animal resident. Some Yellow Jackets will build nests in structures or other above-ground locations, however. If you see black and yellow insects flying in and out of a hole in the ground, chances are they are yellow jackets, and they’re not to be disturbed (by a running lawnmower, for example).

Some Hymenopterans are territorial and become aggressive if they perceive a threat to their home. Bees and wasps release a chemical called an attack pheromone when defending their nest. The scent of this chemical serves as a call for reinforcements and can marshal the collective might of the entire colony against an unsuspecting “intruder.” When bees and wasps attack, they don’t bite. They sting.

These stings are delivered by an organ located on the insect’s abdomen. Bees and wasps pump out venom through the sting using tiny muscles specifically designed for that task. In the honeybee, the stinger is further equipped with barbs that ensure that, once it penetrates a victim’s skin, it remains lodged there. Honeybees die after stinging because the barbs prevent them from removing the stinger from its victim. Instead, the stinger remains lodged in the target of the sting and the some of the bee’s innards are pulled out as it flies away and detaches from the stinger.

However, the idea that all bees can sting only once — like the honey bee — is a misconception. The majority of individual bees and wasps are capable of repeatedly stinging during a single attack. While the actual toxins (in bees, mellitin, a substance that scientists are investigating for its ability to destroy certain cancer cells) that are responsible for the pain and swelling associated with a sting vary from species to species, some human beings experience a serious allergic response to these chemicals, leading, in some cases, to life-threatening anaphylactic shock.

What is the difference between a wasp and a yellow jacket?

Regardless of where they live, what they eat and how scary they are, popular nomenclature regarding the many species of Hymenoptera can be confusing. All yellow jackets are wasps, but not all wasps are yellow jackets. Fat, fuzzy bumblebees, while pollinators like honeybees are one of the bee species that can sting repeatedly. Regarding its potential to inflict pain and distress, a bumble bee should be approached almost as if it were a wasp.

The term "hornet" refers to the largest of wasps. Both yellowjackets and hornets belong to the family Vespidae. These wasps are renowned for their aggressiveness. And yet, were a stray yellow jacket to land on your arm, remaining calm and making no sudden movements to swat or shoo the wasp away will probably be enough to avoid a sting. Some wasps are solitary rather than social, and some are parasites that may not even be visible to the naked eye. Dirt and mud daubers are also wasps, but they build tubes rather than combs and rarely sting.

If you’re still unsure about what may be buzzing around your home, err on the side of caution. And because of the danger involved in treating colonies of bee and wasps, only a pest control professional or experienced beekeeper should accept that risk.