The Life Cycle Of A Beetle

The life cycle of a beetle is defined by four stages. Learn more about how long this insect lives. 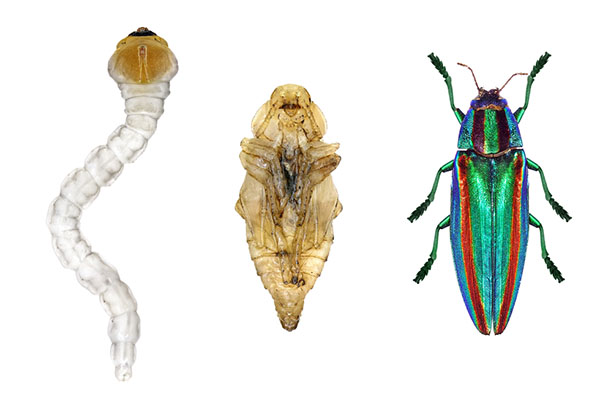 Beetles, like all insects and other arthropods, go through distinct changes in form throughout their life cycle. This change in form is known as metamorphosis. You may recall other examples of life changes from your biology classes such as the caterpillar changing to the butterfly or a tadpole maturing into a frog. The beetle life cycle is an interesting process, and it begins with mating.

Battle of the fittest

The mating ritual of some beetle species can be compared to battles between Roman gladiators. In certain species, beetles will fight to the death – males against males, and females against females – until only one pair remains. This process, which may seem extreme, ensures that the strongest of their kind will produce offspring. Once the victorious male and female join, the mating process can take a few minutes to several hours.

The life cycle of a beetle is known as a complete metamorphosis, meaning it has four very different stages: egg, larval, pupal and adult.

The female beetle, depending on the species, will lay hundreds of small white or yellow eggs. The eggs can be deposited in decaying leaves, rotten wood and even animal feces. Some beetles keep their eggs inside and give birth to live larvae.

Beetle larvae are grub or worm-like in appearance and have voracious appetites. It is in this stage that wood-destroying beetles, such as powderpost and Longhorned beetles, do their damage to structures. The larvae of these beetles feed on the cellulose structure of timber, eating the wood from the inside out. As the larvae begin to grow, they need to discard the outer covering of their bodies, known as the exoskeleton, to provide more room. This shedding, called "molting," may occur between seven to 10 times before the larvae enter the pupal stage.

This stage of the beetle life cycle is where the greatest change in form takes place. The worm-like larvae form the pupa or cocoon as it often called, then lay dormant. During this stage, the larva begin to take the shape of the adult beetle. The time period to reach adulthood from the pupal stage varies dramatically among different types of beetles. Some take as little as 30 days while others may take up to two to three years to fully develop. Once adulthood is reached, the fully mature beetle emerges from the cocoon and begins another life cycle all over again.

The adult stage is the final stage in the life cycle of a beetle. Adults are found in many sizes, shapes and colors. Some adults have large mandibles for catching their prey and for defense from predators. Some species, such as the Cerambycid beetle, resemble wasps to fool predators in to staying away. Other species can emit poisonous or distasteful substances to ward off their enemies.

Understanding the beetle life cycle may help you better identify any that you may find in or around your home. If you have a beetle problem in your home and need help with identification or control measures, call a pest control professional.