If you shudder a little when you think about earwigs, you’re probably not alone. They’ve developed quite a nasty reputation, thanks to urban legends (mostly false) that have been circulating for years. In addition, people who have had earwig problems know what a nuisance these insects can be. 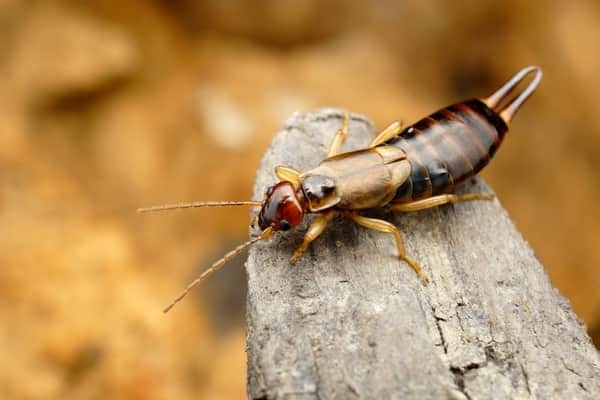 Do earwigs bite? While earwigs could technically bite humans, it’s highly unlikely that they would. After all, these insects don’t need blood meals like bed bugs or mosquitoes to survive, so they don’t seek out human hosts.

However, if you shudder a little when you think about earwigs, you’re probably not alone. They’ve developed quite a nasty reputation, thanks to urban legends that falsely accused them of crawling into people’s ears and burrowing in their brains. Earwigs are considered a nuisance by homeowners, but it’s not because of their bite. Find out how you can identify them and why many homeowners don’t want them around.

Like silverfish, earwigs have slightly flattened bodies and are medium in size. They are typically around five-eighths of an inch in length. These insects are typically black or brown, but some do have stripes or reddish areas on their head and legs. They have noticeable antennae, and while some adult earwigs do have wings, they rarely take flight.

The most distinguishing feature of earwigs is their forceps or “cerci.” These are two hard appendages that resemble pincers extending from the backend of their abdomen. Earwigs use their cerci as defensive tools if they’re attacked by another insect. They also use them as a means of subduing their prey, which is typically smaller bugs.

Earwig bug bites may be rare, but they have been known to pinch humans. But do earwigs pinch humans on purpose? Luckily, the answer is no. They usually pinch humans if they feel threatened and are trying to defend themselves — not because they’re looking to make a meal of you. Even if they wanted to wound you, they couldn’t. Their pincers aren’t very strong and will rarely break skin. Additionally, earwigs are not venomous. Their pincers are actually used as a defense mechanism against other insects and to help attract a mate.

How Do I Know If I’ve Been Bitten by an Earwig?

You now know that earwigs are capable of biting and pinching, but they usually aren’t prone to doing so. Because of this, if you wake up with welts or red bumps on your skin, the culprit most likely isn’t earwigs. For example, they like to share spaces with millipedes, centipedes and sow bugs. And there are many insects that may leave welts or red bumps on your skin, so be sure to properly identify the insects before taking any action.

Our professionals at Terminix® can inspect your home for free to help find out what insects are taking shelter under your roof. Terminix has been in the pest control industry for over 90 years, so we know how to handle many of the pests commonly found inside and near homes. Whether it’s earwigs or other creepy crawlers, we’ve got you covered. Contact Terminix today to schedule a free inspection.