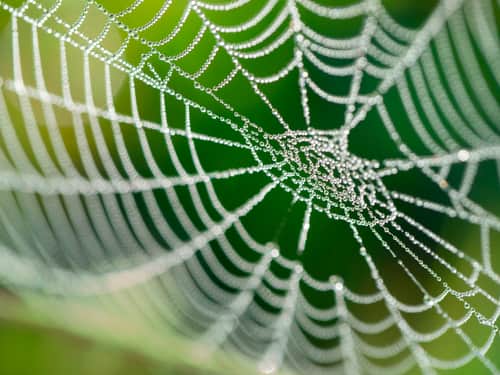 Have you ever gone through a forest path or area in your garden and walked straight into a spider web? It takes some time to remove the sticky web substance from your face and other body parts. So, how can spiders navigate their webs with such ease as they are building webs and capturing prey?

Different species of spiders build different types of webs. Even within a single species of spider, different parts of the web (e.g., outer areas versus center) may have different properties (sticky or not sticky). Spider legs contain hair-like projections (called setae) and tarsal claws (on the tip of each leg) that help them navigate the web.

In the webs of orb weaver spiders, there are spiral-shaped parts along the edges that are sticky (for trapping prey), but other parts (e.g., center) are not sticky. There may also be areas where sticky spots (capture silks) are located and spiders can walk around these areas, if needed. In orb weavers, hygroscopic salts (help with changes caused by humidity) interact with adhesive glycoproteins to make the spider silk sticky.

Unlike orb weavers, cobweb-building spiders (e.g., widow spiders) use a different type of biological glue in their webs. Instead of building webs with spirals, they use “gumfoot threads” that lack the core of glycoproteins (although there are still some insoluble glycoproteins in the webbing material) and do not change very much in response to humidity.

Depending on the species, funnel web spiders build non-sticky or sticky webs. In webs that are not sticky, the structure of the web entangles the prey insects’ feet, giving the spider an opportunity to rush out, inject venom into the victim and pull the prey back into the funnel.

HOW IS SILK USED TODAY?

Silkworm (insect) silks (not to be confused with spider [arachnid] silk) have been used in textiles and also for making sutures used in surgery. These silks are taken from cocoons of caterpillars, and this insect silk contains sericin proteins (not present in spider silk).

Spider (arachnid) silk is much stronger than insect silk. Soluble silk proteins are processed through special spinning organs in the spider, hence producing fiber-like webbing. Spider silk exhibits a high resilience and can absorb three times as much energy as a synthetic fiber, such as Kevlar (material used in bullet-proof vests). In ancient times, silks were also used to stop the bleeding for wounds and also as a delivery method for applying “antiseptic” agents, such as vinegar. Today, investigators have developed synthetic spider silk-based bandages containing antibiotic properties (Harvey et al. 2017).

Spider (e.g., orb weaver) silk proteins are being engineered for use in many applications, including bone tissue engineering (Melke et al. 2016) and nerve regeneration. Silk proteins are desirable for these applications due to a reduced immune response and its biodegradable properties. The physical properties of spider silk make it useful for building the framework for structures that may be used in medical applications.

Scientists are discovering how to spin spider silk proteins. Thus far, spinning techniques have produced spider silk about ten times thicker than natural spider silk. Scientists are also experimenting with making films (rather than threads) from spider silk for use in some applications. The next step for some researchers is to use spider silk fibers as a scaffolding for making medical devices using three-dimensional printers.

We continue to look to nature as a model for items that can have practical use for humans. It is important that we build on current knowledge of natural processes in order to create new materials and improve existing resources.