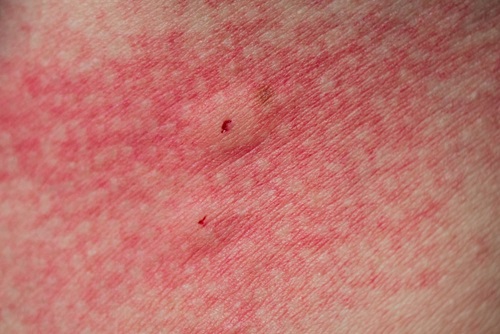 Spiders are arachnids that feed on insects, and in some cases, other arachnids.

Most human encounters with spiders do not result in medical issues, and there is currently not an accurate count of the number of medically important spider bites that occur in the U.S. This is due to the difficulty in diagnosing spider bites and “proving” the link between a certain symptom and interaction with a spider.

All spiders have fangs that may inject venom for defense and/or to subdue their prey. However, few spider species have mouthparts capable of piercing human skin, and only a few of these species are of importance to public health.

A study (Stuber and Nentwig 2016) analyzed 134 case studies from 91 publications of humans bitten by spiders between 1939 and 2014. It found that humans most commonly reported interactions with the following spiders: Loxosceles reclusa (the brown recluse) and Latrodectus mactans (the black widow). However, in most cases, the spider bite was not verified before administering treatment.

There are five species of Latrodectus widow spiders in the U.S., including black, brown and red widows. The black widow is responsible for the most medical issues for this genus of spider. The adult females are shiny and black and have a characteristic red or orange hourglass pattern on the underside of their abdomen. These spiders spin webs of irregular shapes in order to catch prey insects. The mouthparts of male black widow spiders are too small to penetrate human skin, so they are of no medical importance. However, a female black widow spider bite delivers neurotoxic venom (alpha-latrotoxin) to humans in approximately 15 percent of cases.

Outdoors, black widows are found under rocks, behind boards and in utility boxes and crawl spaces. Indoors, these spiders are found in undisturbed corners, under appliances, etc.

If a black widow spider bites a person, symptoms occur within eight hours and may last up to seven days; however, victims may experience weakness and a general feeling of malaise for weeks. There is generally no pain at the bite site, but minor redness may occur. Symptoms may include tender lymph nodes, muscle pain, nausea and abdominal rigidity with no tenderness. The degree of envenomation depends on several factors, including the amount of venom injected, size and species of spider, time of year, size and age of the victim and location of the bite. In patients with other underlying health issues, cardiovascular issues and even death may occur.

There are six species of Loxosceles spiders in the U.S., and the brown recluse is responsible for most instances of medically important bites of this genus. Brown recluse spiders have six eyes, while most spiders have eight. They have a characteristic brown color with a fiddle/violin-shaped marking on the cephalothorax part of the body on the upper surface. Enzymes (sphingomyelinase D and hyaluronidase) in spider venom from a brown recluse spider can cause tissue necrosis surrounding the bite site that can spread and cause further issues. These spiders are not aggressive and only bite humans in defense when they feel threatened. Brown recluse spiders are found outdoors in areas such as wood and/or debris piles and are occasionally found indoors in bathrooms, attics, basements, cardboard boxes and shoes.

Brown recluse bites can feel like a pinprick. Within 24 hours, the bite site can either develop into a focused lesion or can appear more widespread as a necrotic lesion with a bull’s-eye appearance. A brown recluse bite can take up to six weeks to heal, and in serious cases, patients can take months to recover from necrotic ulcers, fever and general malaise. In the absence of a verified spider bite, medical professionals must rule out other conditions (e.g., fungal/bacterial infection, certain carcinomas) that can resemble symptoms caused by the bite by a brown recluse spider.

WHAT TYPES OF SPIDER BITE TREATMENT DO MEDICAL PROFESSIONALS USE?

If you believe a spider has bitten you, consult a medical professional. If possible, bring the spider with you to assist in the diagnosis provided by the medical professional. In general, suspected spider bites are treated with cold presses, antibiotics, antihistamines and/or analgesics. Depending on the type of spider bite, cases may require antivenom (although there’s no antivenom available for a brown recluse bite in the U.S.), blood transfusion, skin grafting and/or surgery. Antivenom is created by injecting an animal (e.g., rabbit) with spider venom obtained from the target spider. Serum from the injected animal that contains anti-venom antibodies is harvested and used as antivenom. Antivenom can result in allergic reactions, depending on the immune response of the patient.

HOW TO HELP GET RID OF SPIDERS

The best way to help prevent spiders is to eliminate their insect food source. You and pest control professionals can help remove insects from the home by cleaning up food waste, etc. Consistently removing spider webs can also help prevent reestablishment of spiders. Cleaning up wood piles, debris and areas of dense vegetation can help prevent spider populations from becoming established.

In areas with severe infestations, a pest control professional can be consulted if pesticide applications are warranted along baseboards and in corners to prevent spiderlings (baby spiders) from hatching from undiscovered egg sacs.

Be aware of spider hiding places. If you are working in a wood pile, crawlspace, etc., protect yourself by wearing work gloves and take care to avoid contact with spiders. Shake out your shoes or boots before wearing them, especially in an area prone to spider habitats.

Reference: Stuber, M. and W. Nentwig. 2016. How informative are case studies of spider bites in the medical literature? Toxicon 114:40-44.