Scroll down to learn about earwigs, what they look like, control tips, and more

Earwigs are small insects that, for the most part, live outdoors but sometimes make their way into homes. These creatures get their name from a long-standing, untrue myth that they will crawl inside your ear and either lay eggs or dig into your brain. While relatively harmless to humans, earwigs look intimidating, possessing a set of pincers on their rear.

While they don't pose much of a threat to humans, they can cause problems in your garden, potentially damaging plant leaves and flowers.

In this article, we'll help demystify these pesky creatures for you, as well as arm you with the information you need to help prevent an earwig infestation. We'll also share the answers to some of the most common questions we hear about earwigs, including:

What are earwigs (pincher bugs)?

Sometimes referred to as “pincher bugs" or “pincer bugs," earwigs are small nocturnal insects that usually live outdoors but sometimes enter houses in search of food, water and places to hide.

There are over 2,000 different earwig species in the world, with 22 of them living in the United States.

With their distinctive look, an earwig is easy to identify. An earwig's body consists of three different parts: its head, thorax, and abdomen. Some species of earwigs have a set of wings located between the thorax and abdomen.

Earwigs have six legs, two antennae, and — perhaps the most telltale part of their anatomy — two pincers called called “cerci" at the end of their body. They use these pincers to pinch and grasp their prey, hence their other name – pincher bugs. Depending on the species, this reddish-brown insect is between ¾ of an inch to one inch in length. 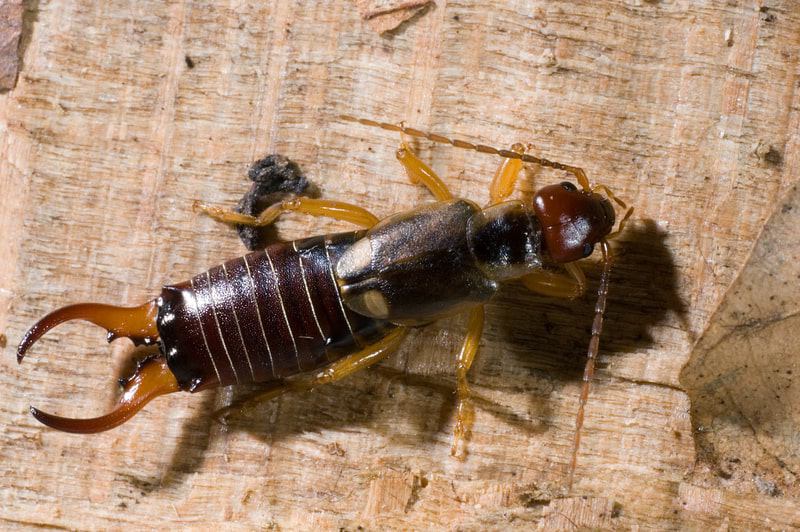 Earwigs usually mate in the fall or early winter and lay eggs in springtime. The female earwig carries her eggs around until she finds a favorable location for laying. That location is usually a hidden crevice. What makes earwigs so unique is the protective nature of the female earwig with regard to her eggs.

Once a safe place has been found, she deposits these eggs – 20 to 60 at a time – in the hole she's dug out for them. She also licks each egg individually to inhibit the growth of fungus on the eggs that could stop them from hatching.

The earwig lifecycle stages are:

Once laid, earwig eggs hatch after about seven days. A female earwig can lay between 20 and 60 eggs at a time. An earwig is one of the few insects that takes care of its eggs until they hatch. 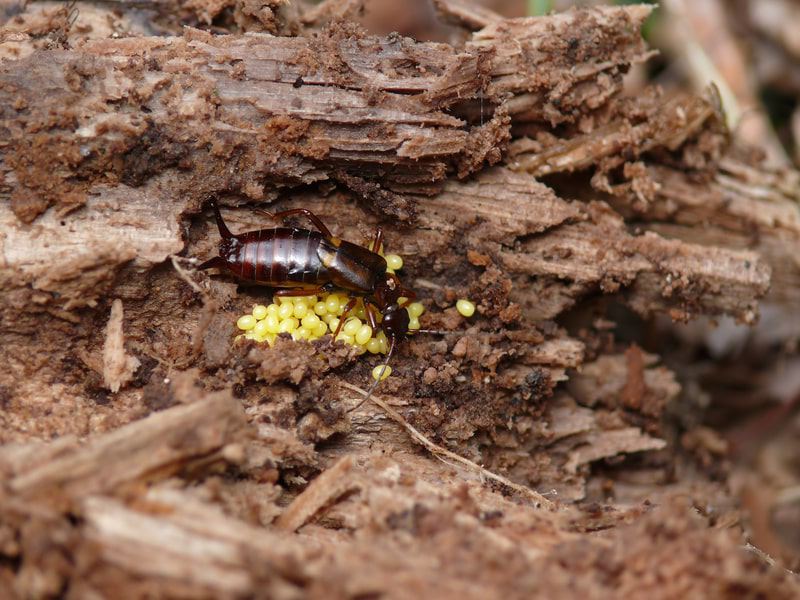 Once an egg hatches, the young earwig enters its nymph (or hatchling) stage. It will take a nymph between four to six molts to reach adulthood.

Molting is the process of shedding old skin and growing a new one. As nymphs go through molting, they grow larger, finally acquiring the features of an adult insect, such as wings.

The average lifespan of an earwig – including its time as a hatchling through adulthood – is approximately one year.

Earwigs are semi-social nocturnal creatures that gather in groups. They prefer to live in moist and humid places and thrive in warmer climates. Outside, you could find them under a pile of wet leaves, garden mulch, or grass clippings.

Although earwigs primarily can be found outdoors and are not typically attracted to homes, they may hide inside cracks and crevices that have a nearby source of water. This usually includes kitchens and bathrooms.

What do earwigs eat?

Earwigs are omnivores that will eat either other insects or vegetation. They have been known to feast on both live prey and dead insects. If no prey is available, earwigs happily munch on grass, flowers, and other plant matter. If an earwig makes its way indoors, these opportunistic eaters will seek out dry goods like flour, and and other pantry staples such as bread or even cookies, if available.

While there are more than 22 earwig species living in the United States, fortunately most homeowners only have a chance to meet a few of them. Here are some of the most common types of earwigs you may encounter:

These earwigs are around 12 to 15 mm long. They have two sets of wings but very rarely use them to fly. European earwigs burrow underground to live through the winter.

These dark brown earwigs appear almost black in color. True to its name, the ring-legged earwig has creamy, yellow-colored eggs that have brown, ring-like markings. They generally can be found in gardens and are between 10 and 26 mm long.

These tan and dark brown earwigs have two vertical stripes going down the front of their body on their thorax. They grow to be around 25 mm (one inch) long.

Maritime earwigs are dark brown or black in color with a yellow underbelly. This species of earwig usually lives in coastal areas, burrowing into moist sand and feeding on other insects. Despite living so close to water and their name, maritime earwigs cannot swim and do not go into the water.

Seashore earwigs can be found in coastal areas, most commonly on beaches in Australia and New Zealand. They have dark brown bodies with tan markings on their back and yellow legs. They often feed on other insects like ants and fleas.

Sometimes referred to as the giant earwig, this species of earwig was discovered on the island of St. Helena back in 1789. The adults were nearly three times longer than most species of earwigs. The Saint Helena earwig is believed to be extinct, but bears the distinction of having appeared on a commemorative stamp.

Do earwigs have wings?

The majority of earwig species have one set of wings located on their thorax. These wings appear almost non-existent to the naked eye, as they are hidden below hard wing covers. When the wing covers open, however, an earwig's wings unfurl to about 10 times the size of their wing covers.

While other species like the European earwig and ring-legged earwigs have wings, they rarely fly.

What do earwigs do with their pincers?

Earwigs use their pincers for a variety of activities, including grabbing prey, intimidating predators, and fighting with each other. Males usually have larger and more curved pincers compared to females' straighter, more narrow pincers.

Why are earwigs called earwigs?

The name “earwig" comes from a myth about these insects crawling into humans' ears and burrowing through their brains while sleeping. In reality, while it is possible for an earwig to crawl into someone's ear, this occurrence is not something to worry about. Yes, earwigs love dark, damp crevices, but an ear is hardly a perfect place for them to explore.

Do earwigs actually go in your ear?

Theoretically, it's possible for an earwig to crawl into an ear. However, since your ears lack food, moisture, and humidity, they aren't appealing to these insects.

Are earwigs harmful to humans or pets?

In very rare cases, an earwig can pinch a human or a pet. In highly isolated cases, its pincers can break human or pet skin. The pinch can leave a tiny red mark that heals quickly. Earwigs don't carry disease-causing pathogens and are not venomous, so their pinching is usually harmless.

While it's technically possible, earwigs don't bite humans. However, they can accidentally pinch you with their pincers. Thankfully, these pincers are very weak, so you aren't likely to feel the pinch.

What attracts earwigs in the home?

Earwigs are active nocturnal creatures that are attracted to light. So, if you have the habit of leaving lights on late at night, and an earwig can find a way to enter your house through any cracks or crevices, it might just do so. Sometimes earwigs enter houses when it starts raining outdoors, seeking refuge in dry hiding places.

How can I prevent earwigs from getting into my home?

Although earwigs pose little threats to humans or their animal companions, they can still be an unwanted presence in your home. Here are a few ways to prevent earwigs from entering your house:

What are the signs of earwig damage or infestation?

Earwigs can wreak havoc on your garden if they decide to make it their home. Here are some warning signs of earwig damage to look for in your garden:

Since earwigs rarely enter homes, seeing one of them on your floor could mean that they have nested in the soil on your property.

How do you get rid of earwigs in your home and yard?

If you notice earwigs in your home or yard, it's time to take action to remove them.

While earwigs can be beneficial to your yard as they feed on plant-destroying aphids, earwigs can also munch on some of your prized flowers and produce from your garden.

In the event that earwigs have infested your home, you can simply vacuum and sweep them up. Be sure to empty your vacuum cleaner or bag to properly dispose of earwigs and seal any cracks where they can enter. Contact a licensed, professional pest control company for help with your specific situation.

How Terminix® helps you with earwig control

Using DIY earwig extermination methods may seem effective at first, but they may not completely eliminate your problem. Terminix can help you find a more comprehensive approach to earwig control. Terminix pest professionals are well-versed in tactics to help keep earwigs out of the house and can offer you expert help in solving issues stemming from these creatures.

Tired of fighting a losing battle with earwigs? Contact us for a free inspection at your convenience!

Earwigs are one of 13 common pests covered with a Terminix Pest Control Plan.1
Sign up for your free Guide to Superior Home Protection.

Earwig Behavior and their Habits

Outsmart Earwigs In-house and Out