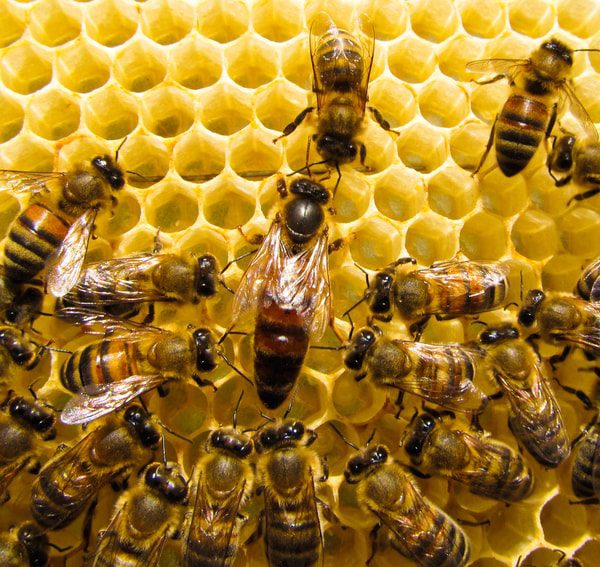 There are many species of bees, but they do not all live and behave in the same way. Bees are either social or solitary, depending on their species. Solitary bees live independently of each other, except for when they breed. Social bees nest in colonies that may consist of just a few members or several thousand bees, all living and working together to maintain their colony under the direction of one bee, the queen bee. Whether social or solitary, everything bees do is to fulfill one purpose: produce more bees to ensure the survival of the colony and their species.

DIVISION OF LABOR
The queen bee is the female reproductive “leader” of the colony among the social bee species. Bees are in the insect order Hymenoptera, along with the many species of wasps and ants. Those species with social colonies are structured in a caste system. There is a division of labor among members of the colony to make sure all the critical colony needs are met.

The queen honey bee is responsible for laying all of the eggs needed to produce new bees and develop the colony. She is the only egg laying member of the colony. She also directs the behavior, the work assignments and the balance of the colony population to make sure it is structurally sound. She communicates her directives with various pheromones, which are chemicals that dictate the behavior of specific bees, and cause some colony members to become workers, some to become drones and others, potential queens.

Worker bees are all female, but they are not sexually mature, and most never will be. They collect and produce food or serve as nurse bees, tending to the eggs, larvae and pupae stage bees as they develop. Some of the worker bees serve the queen, providing her with royal jelly, which is a nutrient required for her effective reign.

The males are called drones, and their only function is to provide sperm for fertilization of the eggs. It may sound like they are the lazy members of the colony that are of little benefit, but the colony could not survive without them. The life of a drone is not quite the “good life” that it may seem to be. Drones die immediately after mating with the queen, and those that do not mate are no longer needed by the colony, so they are dragged from the nest by the workers, where they quickly starve to death.

LIFE SPAN AND SPECIES OF QUEEN BEES
A queen honey bee lives two to three years, on average, with a few living up to five years. There are seven subspecies of honey bees. Most of the honey bees used by beekeepers are Apis mellifera, and there are several subspecies or strains of these, each with unique characteristics, temperaments and other qualities that make their colonies and hives unique. The size of the colony, amount of honey produced, disease resistance and aggressiveness of worker bees are a few of the things that vary among species.

Knowledgeable beekeepers sometimes use queens of different subspecies to develop optimal honey production and other desirable qualities in the hives they maintain. They can also develop colonies with worker bees that are easier to work around, and are disease and parasite resistant. Italian (Apis mellifera lingustica), German (A.m. mellifera), Carniolan (A.m. carnica), Caucasian (A.m. caucasica), Buckfast (hybrid) and Russian (hybrid) honey bees are some of the common subspecies and hybrids that beekeepers utilize.

When a queen bee of a different subspecies replaces a queen in a hive, the colony will change over the next few weeks as the new bees born from the new queen’s eggs mature, and the older bees in the colony reach the end of their natural lives. Worker bees only live a few weeks to a few months depending on the time of year, so the hive can change to a completely new set of bees within that time frame.

WHAT DOES A QUEEN BEE LOOK LIKE?
Queen bees are usually slightly larger than other bees in the colony. Honey bee queens have a more tapered abdomen and often, more golden colored hairs on their body. Since these differences are subtle and queen bees play such a vital role in the colony, beekeepers sometimes mark a queen honey bee with paint to better track her location.

BEE STINGS
Most species of bees can sting, but they are considered docile and are not likely to be a threat to people unless disturbed. Some species of honey bees, such as the Africanized honey bee (A.m. scutellata) are very aggressive, and can be very dangerous to those that get too close to their nests.

Honey bees sting for one reason: they feel threatened, and they are either defending themselves or their nest. When bees feel threatened and respond by stinging, they also release a pheromone that tells other bees in the area that a threat is in progress, bringing them to the fight. In most cases of European bees that become upset, two or three out of 10 will actually sting the threatening offender. Africanized honey bees will respond much more aggressively with eight or nine out of 10 bees joining the action. Even though Africanized honey bee hives are generally smaller than European bee hives, there is a considerable difference in the overall number of stings inflicted.

Africanized honey bees have spread throughout much of the southwestern United States as the aggressive African honey bee queens have overtaken European bee hives, both feral and domesticated, by displacing the docile European queens. Within a few weeks of the overthrow, the hive becomes a fully Africanized honey bee colony as the new queen’s eggs hatch and develop quickly to adulthood. Older European bees begin dying as they reach the end of their life span, completing the conversion.

The queen bee really does control the honey bee colony and her subjects are loyal to the end.