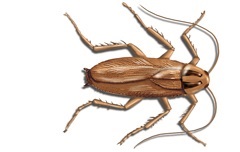 SIZE: The German cockroach ranges in size from about one-eighth of an inch in length when it hatches, to a little over one-half of an inch as an adult.

COLOR: Adult German cockroaches are light-brown and have two stripes on their pronotum, which is the “shield" just behind their head. Nymphs, which are immature or young cockroaches, are similar in color to adults, smaller, do not have wings, and are not capable of reproduction.

BEHAVIOR: Adult German cockroaches have wings, but they cannot fly. If they fall, they can flutter their wings enough to break the fall, but cannot use their wings to get around. They are fast runners and move very quickly in their environment. Their antennae are relatively long, a little longer than the length of their body, and serve as powerful sensory devices for evaluating their environment, finding food and receiving messages from other roaches.

Male adult German cockroaches are slender and a little smaller than the females, who are a little larger and wider in the abdomen. When female adult German roaches are ‟gravid," or pregnant, they have an egg capsule, or ootheca, that can be seen protruding about one quarter-inch from the end of the abdomen. The egg capsule contains about 40 German cockroach eggs that will be carried with her until about 24 hours before the new roaches are ready to hatch. She then drops the egg capsule in a concealed location. When the new roaches open it and crawl out, they are on their own.

If a German roach infestation is found, treatment will be applied in areas where roaches have been or may be hiding. Knowledge about the German cockroach is vital for effective treatment. For example, young roaches often feed on the fecal droppings of the adult cockroaches in “aggregation" areas, while the adults are out looking for food. As grotesque as this may sound, it is a part of pest control that helps achieve timely and effective cockroach elimination. Professional baits are slow-acting by design. When the adults start feeding on baits, they are preparing a final meal for the young roaches. They live just long enough to digest the bait, get back to their aggregation hangout, and leave their final legacy for the developing young roaches.

German cockroaches are usually found living and breeding indoors. They prefer a warm, humid space with food and water nearby. They typically first appear in the kitchen, but since they spend about 80 percent of their time in the wall cracks and voids, infestations are almost always larger than they appear. As the population and infestation grows, cockroaches will spread out from the kitchen to bathrooms, living rooms and other areas of the home.

Despite their name, German cockroaches are found all over the world, including in homes throughout the United States. Currently, many researchers believe they probably originated in Southeast Asia.

Due to the rapidly developing population and the hidden areas where German cockroaches are found, it is best to leave these infestations to the pest control professionals. Service technicians use a variety of treatment methods including physical removal of German cockroaches and targeted applications of baits, dusts and/or aerosol treatments. There should be no visible residue of the materials used after treatment. Several non-chemical techniques may also be utilized including vacuum removal and monitoring of populations with glue traps or other devices. Homeowners attempting control with over-the-counter products on their own are often met with frustration at the growing infestation and soon call pest management professionals.