What are Sand Fleas?

Many people love going to the beach to spend time in the sun, sand, and water. But they might not love some of the nuisances that live at the beach or in the ocean, such as gnats or jellyfish. But, what about the sand flea, a small critter that can be found in moist areas such as under rocks or debris. Keep reading to learn exactly what sand fleas are and if you need to worry about them. 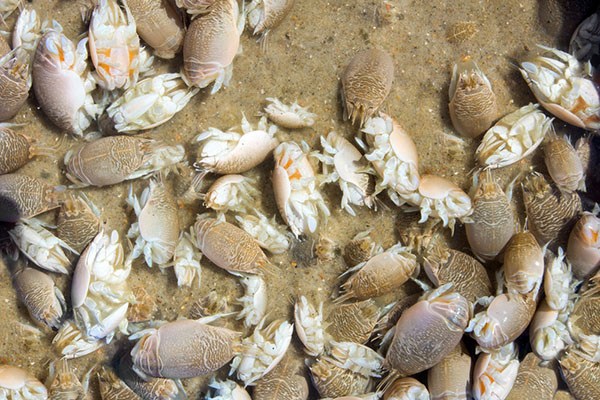 Sand fleas are very small, and are usually anywhere from a quarter of an inch up to an inch in length. One species found in the United States, known commonly as the Atlantic sand hopper, can grow up to an inch in length. Sand fleas can vary in color, but may be gray, brown, or greenish. They have several pairs of legs, and long, thick antennae. Additionally, sand fleas have two forked appendages that protrude from the backs of their bodies.

Where do sand fleas live?

Their common name answers this question: sand fleas live in sand. More specifically, sand fleas live on sandy beaches near the high-tide mark. They are most active at night, when they’ll emerge to forage for food. During the day, they’ll stay buried in the sand.

Can sand fleas travel home with you?

While some amphipods may become a nuisance to certain homeowners, like the terrestrial amphipods commonly referred to as land shrimp, that’s not the case with sand fleas. According to Texas A&M, sand fleas “generally cause no problems or concerns in urban environments.” Instead, they prefer to stay in their sandy beach environments. For this reason, it’s unlikely that you’d bring a sand flea home with you. Finally, sand fleas are most active during the nighttime, which is not when most beachgoers are visiting the beach, so you might not even come across these hopping crustaceans unless you are digging in the sand or picking up rocks on the beach.

As you can see, despite their common name, sand fleas are not at all like the common pesky fleas you’re used to hearing about. So what is the only similarity between true fleas and this small, sand-loving crustacean? Their jumping abilities.