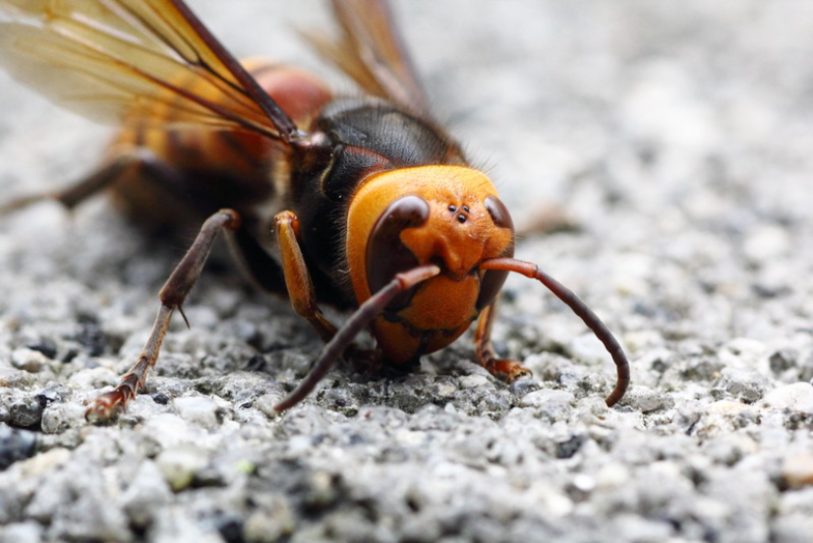 Starting in 2020, the Washington State Department of Agriculture, or WSDA, began an outreach program asking the general public to report any sightings of the Asian giant hornet. Despite the use of the name “Murder Hornet” in the current heavy media coverage, the Asian giant hornet is not an insect most people need to be afraid of. Discover what you need to know about the Asian giant hornet, including where it came from, some of its behaviors and if it can be found throughout the U.S.

What is an Asian Giant Hornet?

The Asian giant hornet, as you may have guessed from its name, is a hornet native to Asia. It is also the largest hornet in the world, with queens growing over 2 inches in length and workers growing up to about an inch and a half in length. To put that into perspective, that is five times the size and 20 times the weight of a honey bee, according to Purdue University’s online pest tracker. Asian giant hornets are social insects and live in a nest with a queen and several workers.

How Was the "Murder Hornet" Name Created?

The name “murder hornet” has been coined by the media. This is not the common name used by entomologists although if you read about the Asian giant hornets behavior below you can see why the media uses the name.

Similar to other hornets, the Asian giant hornet is known as a predator to primarily arthropods. The Asian giant hornet actually removes the head from the thorax of its prey. This allows the hornet easier access to the more muscular sections located in the insect thorax.

Additionally, although hornets are known for hunting alone, the Asian giant hornet will group together for mass attacks on yellowjacket, honey bee and paper wasp nests. These hornets are known for their violent predatory behaviors toward other insects like honey bees and yellowjackets. In fact, these hornets can destroy an entire bee colony. According to Purdue University’s online pest tracker, a single Asian giant hornet can kill as many as 40 honey bees per minute.

But, according to the USDA, the Asian giant hornet has a powerful sting that can be hazardous to human health. Although humans aren’t typically the main target of an attack, these hornets are known to fiercely defend their nests. Therefore, it’s still important to stay at least 10 feet away from a nest’s entrance.

When Are Asian Giant Hornets Most Active?

Like many insects, Asian giant hornets follow specific behavioral cycles. After overwintering during the winter months, a queen Asian giant hornet will emerge in the springtime and begin to look for a suitable nesting site. In this pre-nesting stage, as she searches for a nesting place, she’ll also feed and develop her ovaries. In the summer, the queen will first be solely in charge of the nest and taking care of the newly laid eggs. Once enough workers mature, the queen will become nest-bound. In the fall, the colony will begin to produce new queens and reproductive males. New queens will mate before they overwinter, and the cycle will begin again.

Can You Find Asian Giant Hornets in the U.S.?

As mentioned at the beginning of this article, an Asian giant hornet was identified at the end of 2019 in Washington state and as of summer of 2021, they have not been found in any other part of the United States. In the report released by the USDA, the department stated that “It is early in our understanding of this species and its invasion potential, and we have little data available on its presence here.” If you live in Washington state, you can also follow the WSDA for updates on the Asian giant hornet.

The Asian giant hornet is considered a quarantine pest for the United States. This means the USDA develops site-specific plans to detect, survey, monitor, control, contain, suppress and eradicate an infestation. If you suspect that you see an Asian giant hornet, you should contact the USDA or your local state extension office for next steps.