What is Spider Silk?

Spider silk has been described as "stronger than steel." Is that true? Learn that and more. 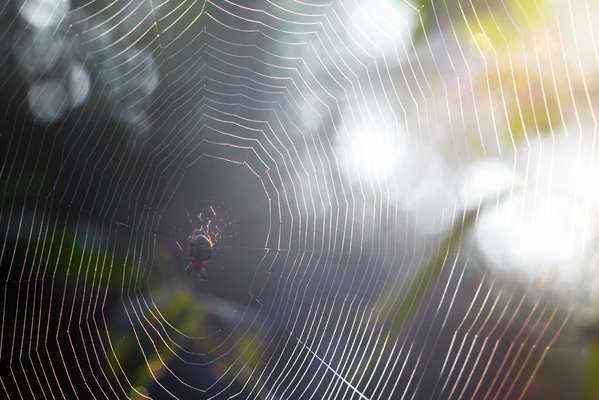 When you think of spiders, a lot of things may come to mind. Undoubtedly, one of those things may be the fact that spiders spin webs. The material spiders use to make those webs is called “spider silk.”

But what is spider silk? And does it have any uses other than catching flies and other insects? Get ready to find out, because we’ve got the answers to these questions and more.

WHAT IS SPIDER SILK?

Spider silk is a fiber made up of proteins. Each spider typically spins several different forms of silk. Some spiders use one form of silk to spin the webs they use to catch their prey and then use a different silk to wrap the prey up in a tidy bundle. Other species of spiders — like the jumping spider, for example — use their silk to make little shelters instead of webs.

Additionally, many different types of spiders use their silk as a mode of transportation. You know how Spider-Man® shoots webs so that he can swing from building to building? Well, he got that idea from actual spiders.

Certain species of spiders will use their silk as an anchor when jumping so that they don’t fall if they miss the mark. Others climb up high and release strands of silk into the wind. The wind then picks them up and carries them miles and miles away.

HOW STRONG IS SPIDER SILK?

Spider silk is surprisingly strong, which is part of the reason why it’s so hard to break free of a web when you walk through it. On more than one occasion, spider silk has been described as being “stronger than steel.” While it’s not actually stronger than steel, it is an incredibly strong material for something that appears so delicate.

In addition, the silk is very elastic. Some types of silk can stretch more than five times the length of the original strand. Pretty impressive, right?

WHAT IS SPIDER SILK DOING IN TERMS OF SCIENCE?

Unsurprisingly, the strength and flexibility of spider silk has caught the interest of scientists. Many scientific minds have spent years studying strands of the material to see what sort of innovations can be made from it. Unfortunately, it’s pretty hard to harvest spider silk, so there hasn’t been a ton of progress.

But that hasn’t slowed scientists down. They’re still working on ways to duplicate the proteins found in spider silk. One of the more interesting techniques that’s been tried is genetically modifying goats so that their milk contains the same protein that spider silk is made from. They’re called “spider goats.”

HOW CAN SPIDER SILK BE USED BY HUMANS?

Once scientists crack the code on how to synthesize the silk, they have plenty of ideas for how it can be used to benefit humans. Here are several examples they’re eager to work on:

It’s clear that spider silk is an amazing material that has the potential to revolutionize many different industries. Who knew something so seemingly simple could have so much potential? Well, now you do. And we bet you’ll never look at a spider’s web in quite the same way.