What do Spiders Eat?

What do spiders eat? Most spiders are predators that feed on insects and even other spiders. Learn more about the spider diet. 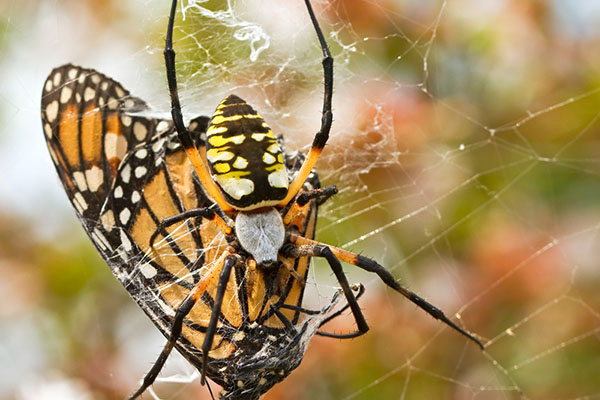 Spiders belong to a group known as the Arachnids and are found in every region of the world except Antarctica. Spiders have eight legs and two body parts – the cephalothorax and abdomen. Spiders also have jaws called chelicerae that include fang-like appendages at the tip. Some species of spiders have modified mouthparts used for grasping or crushing their prey.

So, what do spiders eat to sustain themselves? Most people are fearful of being bitten by a spider, however, it's important to note that humans are not a food source for spiders. With that said, let's take a look at their preferred food choices.

The food source for spiders depends on the species. Most spiders are predators feeding on insects and even other spiders. It's important to know that mo st spiders will only feed on live prey or prey that they have recently killed.

What’s on the menu?

Spiders are known to eat a variety of foods. Web-building spiders commonly consume flying insects such as flies, mosquitoes, moths and butterflies. Hunting spiders, as their name implies, lie in concealed areas and attack their prey as it comes near, while other spiders are fast enough to run down, capture and eat insects such as crickets, grasshoppers and beetles.

What do spiders eat other than bugs?

Although most types of spiders do not eat plant foods, there are a few species that will feed on materials derived from plant life. In the jumping spider group, there is one species that gets 90 percent of its nutrients from the leaves of the Acacia tree, found primarily in Central America. There is also a species of water spiders that constructs its web under water. The primary food of choice for this spider is fish.

Now that you know you're not part of the food chain for spiders, that doesn’t mean you have to tolerate them invading your space. If spiders are a problem, call the pest management professionals at Terminix® for the best solution.