How to Identify Wasp Nests Outside Your Business

One or two wasps flying around your business can be a nuisance, but they could also be a sign that there is a nest nearby—which means plenty more wasps. While wasps don't usually go out of their way to sting people, they may turn hostile if they feel threatened, and stings are not only painful, but they can also cause a dangerous allergic reaction in some individuals. 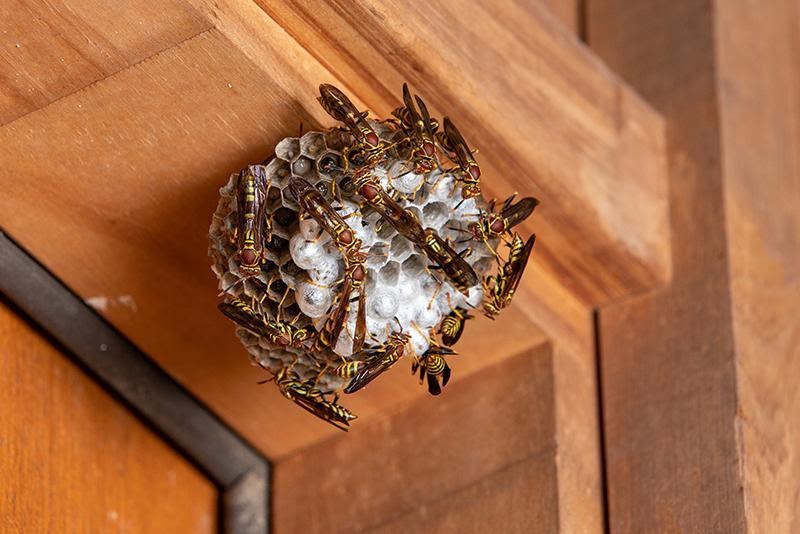 Wasps can become especially active in the late summer and early fall, but when you know what to look for, wasp nests don't have to be the cause of disruptions to your business. Here's what you need to know about common types of wasps, how to identify their nests, and what to do about them.

There are over 4,000 different wasp species in North America, but only a few of those are considered pests. The most common type you should watch out for as a business owner are social wasps because their colonies can grow quickly and become difficult to control. Here's how to identify some of the social wasp varieties that could potentially threaten your business.

Appearance: Anywhere from 0.5 to 1.5 inches long, paper wasps range from orange to reddish-brown, some with bright stripes.

Nests: Usually located in exposed, but protected, areas such as the corner of windows, under awnings, decks, or patios and under hose reels or in sheds or crawl spaces. They look like round, upside-down honeycombs attached by a single stalk to a horizontal surface.

Behavior: Most paper wasp colonies are small with a few dozen workers but can grow to over 100 wasps in some circumstances. Classified as predators, they feed on insects, spiders, and caterpillars. While their pollination skills make them beneficial for gardeners, they will sting when they feel threatened. In the spring and summer, workers are looking for protein to help grow their nest and in the late summer and early fall they are attracted to sugary substances like juice or overripe fruit.

Prevention: Paper wasp colonies usually start up in the early spring or summer. Keep an eye on locations where wasps might start building a nest. In the late summer and fall, make sure garbage receptacles outside your business are kept clean and sealed as much as possible.

Appearance: A yellow jacket is hairless with a thin waist and elongated wings. It is recognizable for its distinctive yellow and black stripes.

Nests: A type of ground wasp, yellow jackets usually seek out abandoned rodent burrows to build their nests underground. There will be a single entrance often no larger than the size of a nickel. While a few will survive the winter as queens to start next year's colonies, their nests usually die off in colder weather. If you live in a region with a mild climate, the colony can survive all year round and grow into the thousands.

Behavior: Attracted to areas with plenty of food sources like flies, caterpillars and spiders, yellow jackets can be helpful in eliminating other types of pests. But they can also become aggressive if they feel threatened and are most likely to sting in the late summer and early fall. Unlike honeybees, they can sting multiple times without losing their stinger.

Prevention: A yellow jacket will travel up to 1000 feet from their nest to forage for food so make sure to keep garbage containers around your business sealed and emptied regularly.

Appearance: A hornet is a type of wasp that is much larger than a yellow jacket and black and white or brownish red in color.

Nests: Often found under roof eaves, behind shutters, inside sheds, within bushes and trees, or even in attics or wall voids, hornets' nests are constructed out of wood pulp and saliva. The inner part of the nest consists of hexagonal cone shapes and is encased in an outer covering. The nest can grow to be the size of a basketball and only last one season.

Behavior: Hornets are more aggressive and more likely to sting than other types of wasps—and their stings are more painful.

Prevention: Overall maintenance to your building will ensure there are no openings for hornets to get in and start building a nest. Check landscaping like trees and bushes regularly to catch a nest before it grows out of control. If you do suspect there is a hornets nest inside or near your business, calling in professional pest control technicians is the best course of action.

How to handle wasp control and wasp nest removal

If you know what to look for, nipping a small wasp nest in the bud is a lot easier than getting rid of a large colony. Staying vigilant in the early spring and summer when nests are in their early stages can help prevent a larger problem that can affect your business in the fall. If you're looking for DIY wasp nest removal solutions, think again—doing it yourself can be dangerous and ineffective in the long run. Professional service providers can ensure wasp control and wasp nest removal is done properly and safely.

Whether you operate a restaurant with a patio, a hotel with outdoor space, or manage property with grounds to maintain, keeping any eye out for wasp nests should be an important part of your maintenance routine.