Mud daubers are solitary insects most known for their habit of building nests out of mud. While these common insects may look like stinging wasps, are they just as dangerous? 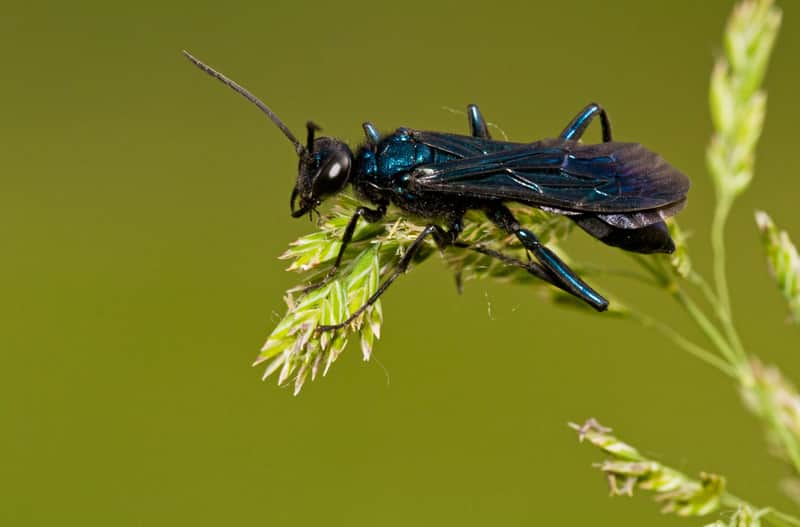 Although they are capable of stinging, mud daubers are unlikely to sting, even when disturbed. Mud daubers’ venom is mostly used to paralyze and preserve their prey. They’re also not aggressive and they do not defend their nests as social wasps do.

However, mud daubers may sting if they are mishandled or feel threatened. Like all wasps, the mud dauber can deliver multiple stings. The pain caused by the sting of most mud daubers is not considered especially painful.

Anyone with an allergy to wasp venom may experience a severe allergic reaction to a mud dauber sting. According to the Mayo Clinic, if a stung individual shows the following symptoms after an encounter with a mud dauber, he or she should seek immediate medical attention:

What is a Mud Dauber?

Mud daubers are large wasps that can measure up to 1 inch in length. Unlike brightly colored wasps, such as paper wasps or yellow jackets, mud daubers are usually dark blue or black, sometimes with a slightly metallic appearance. They may have some yellow coloring as well. Mud daubers also have very long, narrow waists.

In temperate regions, mud daubers are most active in the late spring and summer. In tropical climates, they're active year-round. You’re most likely to see mud daubers in the daytime near puddles, where they’re collecting mud, or in areas where they’re building, or have built, their nests.

Mud daubers build small nests of mud in areas where the nest will be protected from rain. These nest can often be found under overhangs, such as eaves. You may also find these nests stuck to the walls of buildings or the sides of equipment. Mud daubers may also seal up cracks or crevices in wood, stone or brick or fill holes in equipment and lawn furniture. In some cases, mud daubers may even nest inside the electric motors of unused machinery. Mud daubers also commonly shut down lawn mowers, weed eaters and other equipment with small gas engines when they build their nest in exhaust holes. 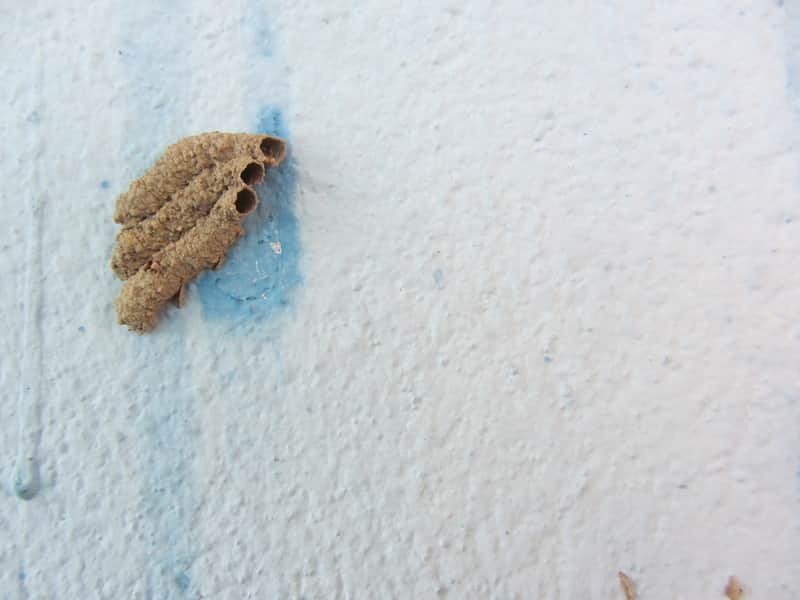 One female mud dauber builds one nest in which to raise her brood. Each nest is divided into inch-long chambers. The female mud dauber stings and paralyzes her prey (spiders), preserving them until her offspring are ready to eat them. The mud dauber queen lays one egg on top of each spider she secures inside the nest. This process continues until each chamber of the nest has been filled and sealed. The mud dauber queen then leaves the nest and doesn’t return. When her eggs hatch, the worm-like larva consume the prey the queen has supplied for them. Once the larvae pupate, emerge as adults, they will chew through the mud walls of the nest and emerge.

There are many other types of mud dauber nests. This is a way you can identify which species you’re dealing with.

Although mud daubers generally aren’t dangerous or destructive, they can become a nuisance if they choose to build a nest under your eaves, on your porch, under your patio covering or in a garage or shed on your property.

To help prevent these wasps from building nests around your home, reduce the local populations of their prey, including spiders. Seal cracks and crevices where spiders hide and live and remove spider webs from corners.

You should also have mud dauber nests removed. That’s because mud daubers will sometimes re-use an existing nest. Also, if there’s a queen looking to build a nest, then she may build it in an area where there’s another nest.

If you're dealing with mud dauber or spider issues, contact Terminix®. Our pest control professionals are here to help.