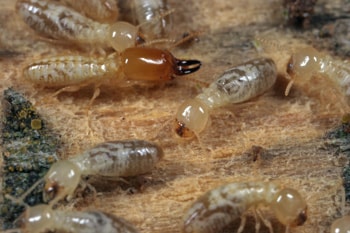 Knowledge of termite biology is necessary when designing and implementing successful control programs. Termites are considered detritivores, eating dead plants, and are important for recycling plant waste in the environment. Termites are insects that efficiently digest cellulose (found in wood, wood paneling) and products that contain cellulose (e.g., paper, cardboard, paint canvas, carpet) and are taxonomically related to wood-eating cockroaches.

Some scientists believe the efficient manner in which termites convert cellulose to microbial products can aid in the production of biofuels used by humans. The enzymes involved in breaking down biomasses in the termite foregut/midgut (site of depolymerization) and hindgut (site of saccharification and fermentation) are under study. In other words, these enzymes break down cellulose into simple sugars, such as glucose, that termites use for nutrition.

Flagellates (protists) and bacteria exist symbiotically in the gut of the lower termite, while higher termites have bacteria but no flagellates. Flagellates and bacteria assist the termite in cellulose digestion and, in turn, receive nutrition from the termite. Some termites are “fungus farmers,” i.e., fungi thrive on termite excrement and the termites benefit since fungi-infested wood is easier to digest.

HOW DO TERMITES DIVIDE LABOR?
Knowledge of the species of termite you may have infesting a residence or other structure is important as termite treatment options differ for each type. Termite colonies can be composed of up to several million insects and can be divided into three groups:
A caste system exists in termite colonies and includes the king, the queen, soldiers and workers. The king and queen are monogamous, and she is responsible for producing and laying fertile eggs (thousands per year). If the queen dies or otherwise leaves the colony, a new queen develops from an immature (nymphal) termite or a worker can differentiate into a reproductive queen.

The soldiers have large specialized heads and defend the termite colony by blocking entrance/exit tunnels and/or emitting secretions that subdue enemies. Some soldiers (depending on species) can injure enemy soldiers and also secrete toxins, poisons and/or anticoagulants to further harm their enemies.

Worker termites are in charge of digesting cellulose in wood products and feeding other termites in the colony through trophallaxis, i.e., termite workers transfer food/liquids to other termites (immature termites, soldiers and reproductives) via mouth-to-mouth or anus-to-mouth. Established subterranean termite colonies typically use about 1/3 of an acre as a food foraging area.

WHAT DO TERMITES WITH WINGS MEAN?
Termites communicate via chemical means, such as pheromones (alarm, trail, contact, sex), where one termite can change the behavior of another termite. Some pheromones require termite-to-termite contact for communication, while other pheromones are volatile and can travel through the air. Each termite colony has a distinct odor, depending on factors such as diet and the amount/type of gut microbes.

Alarm pheromones may be emitted by termites (via a frontal gland) when a non-nest mate is present or even when a pathogen (e.g., virus) is detected that may harm the colony. Alarm pheromones recruit more soldiers to an area of concern. Soldiers can also move in such a way to create vibrations that are a form of communication to other soldiers signaling alarm.

Trail pheromones (emitted from an abdominal or sternal gland) can be used for a variety of purposes, e.g., bringing other workers to food sources, identification of a new nesting location and/or recruitment of soldiers for defense.

Queen termites can emit releaser pheromones that control behavior (e.g., so that workers tend to the queen and her eggs) or volatile primer pheromones that control physiology (e.g., so that workers subdue termites that may be showing signs of being reproductive – a threat to the queen). The queen’s eggs also release a volatile pheromone that suppresses the development of a non-queen termite into a reproductive termite. It is possible that a non-queen that has reproductive potential can impact the queen’s reproductive development by influencing the endocrine system; however, this is still under study by scientists.

WHERE DO TERMITES LIVE?
Most species of termites live in underground nests; however, some species build elaborate mounds, above-ground nests or mud tubes. Mounds are made from termite feces, plant material and soil. Subterranean termites and dampwood termites require plenty of moisture for survival. Some subterranean termites travel above ground in areas of high moisture (e.g., roof leak, water heater, rainfall on boats, porches with plants that are watered frequently, etc.) and this can be indicated by shelter tubes built by termites that lead from underground nests to aboveground food sources.

TERMITES AS PESTS
Each year in the US, termite damage and treatment of homes and trees costs billions of dollars. Pest management professionals should be consulted to help prevent, diagnose and treat termite issues in residential settings. There are a variety of non-chemical and chemical methods that can be employed to help prevent and mitigate termite-related issues.