How Do Termites Communicate?

Find out how termites communicate with others in the colony through pheromones and termite trails. 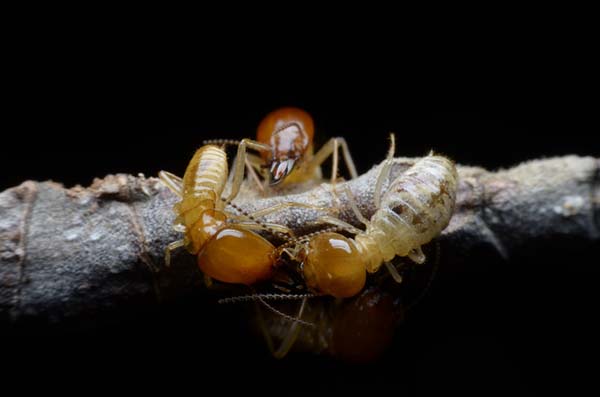 It's All About the Scent

Termites communicate with each other through a form of chemical messaging. Each family group, called castes, within the colony emits a termite pheromone scent that is specific to that group. The recognition of these different pheromone scents plays a vital role in the survival and growth of the colony.

Termites feed on wood or anything made from wood, including cardboard, books and paper. Worker termites forage randomly and continuously for wood food sources year-round. Once workers locate a food supply, they secrete a pheromone scent from their sternal glands to mark the location. They continue to leave this scent along their path as they return to the colony. This forms a termite trail which then leads their nest mates to the food source and back to the colony.

Sharing the News Through Food

‟Trophallaxis” is the term used for the termite’s process of sharing food throughout the colony. This can be done by regurgitating food from the stomach then transmitting it mouth to mouth, or through dispersing fluids from anus to mouth. This food sharing also delivers chemical messages generated by the queen to all members of the colony.

The Queen Is in Control

Because each termite caste has its own distinctive pheromone scent, the queen can detect if there is a loss of pheromone given off by a specific group. For example, if ants invade the colony and kill a large number of the soldiers, diminishing the amount of scent from this group, the queen will produce an extra number of soldiers to replenish the supply.

Termite pheromones are important in many ways, but none more important than for the protection of the colony against predators. If an animal, insect or other natural enemy of termites attempts to invade the colony, termites nearest the danger will begin to bang their heads against the walls of their home, creating a vibration. This vibration is accompanied by the release of an alarm pheromone, both of which serve to warn other termites of the threat. Termite soldiers then rush toward the intruders to protect the colony.