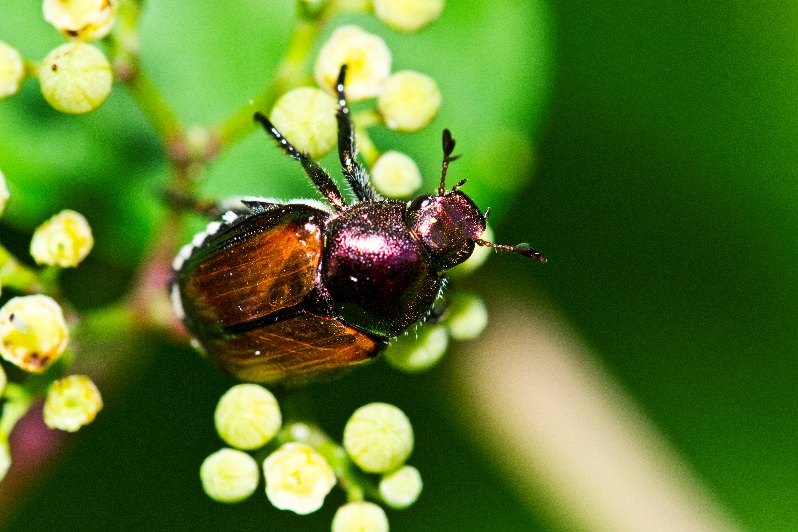 You may be familiar with flying beetles that are commonly referred to as June bugs, lightning bugs and ladybugs. These belong to the largest insect order, Coleoptera. Some scientists estimate that there may be more than three million species found around the world. Because there are so many types of beetles in existence, understanding which beetles can fly and which types cannot may help you identify those you come in contact with.

No other insect can be found in such a variety of shapes, sizes and colors. Some beetles are so small that you would need a magnifying glass to see them, while others are as large as a baseball. There are, however, identification features that are consistent among all species of beetles. For example, they all have three body parts: the head, thorax and abdomen. They also have antennae and two pairs of wings. Beetles have wings that are hard and shell-like. Chances are you’ll hear or feel a crunch if you step on one. Do beetles fly? Due to the development of the wings among the different species, some beetles can fly, while others cannot.

The beetles that can fly have one pair of wings called alae. These are softer wings that are covered by a hardened outer pair of wings, known as the elytra. The outer wings serve as protection for the softer wings used for flight. Some common beetles that can fly are carpet beetles, flour beetles, drugstore beetles, cigarette beetles and hide beetles. If you live in the Eastern United States and are into gardening, you may also see the Japanese beetle. These beetles can be devastating to plants as they feed in groups. They are strong fliers over short distances.

In the case of beetles that cannot fly, both pairs of wings are hardened. This makes it nearly impossible to create lift. Saw-toothed grain beetles, Khapra beetles, spider beetles and the appropriately named ground beetles, are unable to fly.

Flying or crawling, no one wants destructive beetles entering their home or yard. So, can beetles fly? Some can, but only until they meet a Terminix® Service Technician.