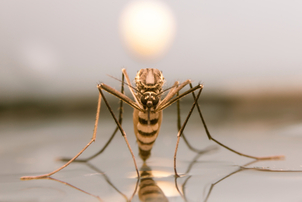 The period between June 1 and November 30 is hurricane season in the United States. Mosquito control programs and other county/municipality/state entities involved with disaster preparedness should have plans in place well before mosquito season in order to be prepared for potential emergency mosquito control after a natural disaster, such as a hurricane. The public should routinely be informed of ways to protect themselves from mosquito bites in advance of an epidemic or disaster, such as a hurricane. Communication between public health agencies, private companies, university partners, community groups, the public, etc., is essential to ensure an effective response. There should be a designated leader (potentially a state medical entomologist or epidemiologist) that can coordinate mosquito surveillance and control efforts among groups.

DO HURRICANES INCREASE THE CHANCE OF MOSQUITO-BORNE DISEASE?

Widespread damage, high amounts of rainfall and flooding can result from hurricanes. Increased availability of mosquito egg-laying sites inevitably increases mosquito abundance, especially for flood water, woodland pool and salt marsh mosquitoes that can be considered nuisance mosquitoes. Increases in abundance of mosquito species that transmit pathogens (West Nile virus, Zika virus, etc.) may also be observed after such rain events, and these are considerations in post-disaster mosquito control.

Although the hurricane event itself likely kills large amounts of mosquitoes, standing water left behind inundates existing flood water mosquito eggs, stimulating hatching, and provides multiple sources for additional egg laying by other species. Seven to 10 days (depending on environmental conditions) after a hurricane or other significant rain event, the first round of mosquitoes is expected to hatch, and newly emerged females will seek blood-feeding hosts and lay more eggs. This process will continue and mosquito populations will multiply unless control measures are implemented.

Disaster recovery efforts by emergency workers can be impeded by large numbers of host-seeking mosquitoes. Power outages are common after hurricanes, and without air conditioning, hot outdoor temperatures may encourage the public to open windows, thereby increasing the chance of mosquitoes entering homes and biting people if no window screens are used. This can increase the chance of exposure to mosquito diseases and secondary infections that may occur as a result of a mosquito bite. In order to protect workers and public health, it may be necessary to conduct widespread mosquito control to provide temporary suppression of mosquito populations.

HOW DOES REIMBURSEMENT THROUGH THE FEDERAL EMERGENCY MANAGEMENT AGENCY (FEMA) WORK?

A county must first notify its local Emergency Operations Center (or equivalent) to alert the agency of the potential for emergency mosquito treatment. Assessments should be made as to what geographic areas of a county should be treated for mosquitoes. These assessments should be based on mosquito abundance in areas with a high density of human populations and also the risk of mosquito-borne disease. Some areas may be candidates for truck-mounted, ultra-low volume adulticide treatments, while other (larger) areas may require aerial treatments of larvicides and/or adulticides. Larvicides are generally applied when the water starts to recede, in order to increase effectiveness and reduce the dilution effect.

Treatments can be carried out by local mosquito control programs (depending on capacity), or reputable private companies may be contracted for this work. A National Pollutant Discharge Elimination System permit must be acquired through the state Division of Water Quality if over 15,000 acres of land are to be treated annually for mosquito control. The state Department of Agriculture and Consumer Services Division of Pesticides (or equivalent) is usually involved with verifying that treatments are in compliance with state regulations. Communication with appropriate local/state/federal agencies are essential in order to be in compliance.

Once the treatment area is determined, the U.S. Fish and Wildlife Service must be consulted in order to ensure avoidance of habitats for threatened and/or endangered species. Beekeepers and the public should also be notified of any planned widespread mosquito control treatments.

FEMA will consider data from carbon dioxide–baited Centers for Disease Control and Prevention (CDC) light traps and/or mosquito landing rate counts (LRC). For LRCs, it is recommended that personnel track how many mosquitoes land on both legs (from belt to shoe) in one minute. Landing rate counts are useful when light traps and the expertise for identifying mosquitoes is not available. While LRCs do not provide any information about mosquito species present, they provide an indication of mosquito abundance. If possible, LRC and/or light trapping should be conducted pre-hurricane (to establish baseline), immediately after the hurricane (another baseline measure before hurricane-related mosquitoes emerge) and seven to 14 days after the hurricane (to measure adult mosquito abundance and species resulting from storm).

Identification and counting of species in mosquito traps is important in risk assessments, as an increase in older primary or secondary vectors of pathogens may indicate an increased risk of disease. Flood water mosquitoes are not generally implicated in virus transmission cycles, hence resources should be devoted to pooling species of public health concern (which depends on what arboviruses are present in the area). Mosquito pooling for virus testing and/or continued monitoring of some arboviruses (e.g., West Nile virus, Eastern equine encephalitis virus) through sentinel chicken serology (i.e., virus antibodies that can be tracked in the blood of chickens placed in the field) may also take place in areas where functioning mosquito control programs are present. Some agencies also choose to conduct LRCs and trapping after treatments as a measure of efficacy of control measures. Ideally, historical information on mosquito species abundance for a few years prior to the disaster event (e.g., hurricane) should be submitted to FEMA in order to support the notion that mosquito abundance is greater than “normal.”

FEMA also considers historical information on mosquito control program budgets (e.g., insecticide and personnel costs) when making a determination on reimbursement for post-disaster treatment costs. If a particular area has no mosquito control program, historical data from neighboring counties may be used. In some cases, however, this is not recommended and reimbursement is not guaranteed. FEMA may consult with the CDC Division of Vector-Borne Infectious Diseases on matters pertaining to post-disaster mosquito control.

More information on how FEMA determines eligibility for reimbursement of post-disaster mosquito control can be found here.

The risk of mosquito-borne disease in the U.S. remains, regardless of potential disasters, such as hurricanes. The importance of sustaining long-term mosquito surveillance and control programs cannot be overstated. As exotic mosquito-borne viruses continue to be introduced into the U.S. and we continue to battle endemic viruses, we must remain vigilant to protect public health.