How to Help Get Rid of American Cockroaches 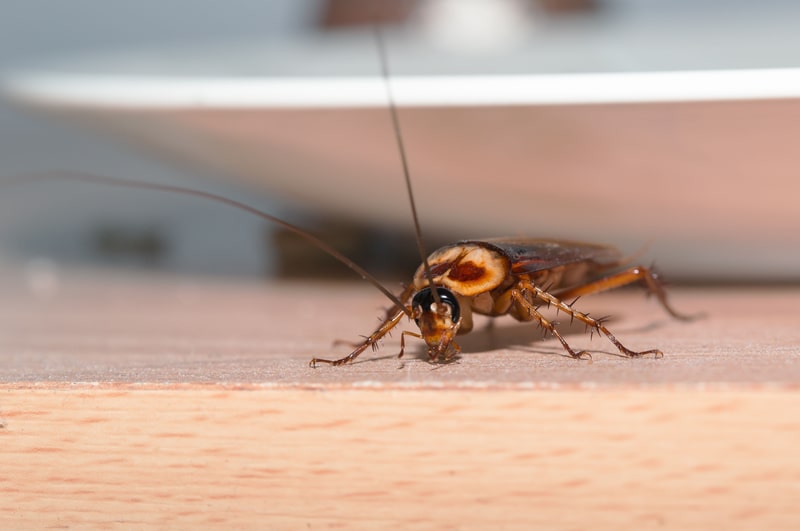 Cockroaches are one of the most common home pests in the world. There are a staggering 4,500 species of cockroaches around the globe, but the University of Florida reports that there are only 69 cockroach species found in the United States. Yet for many homeowners, that's still 69 too many.

Each different cockroach species has its own habitats and behaviors, and proper identification is key to helping control their populations in and around your home.

The American cockroach is one of the more prominent species that may infest homes. Learn more about this species of cockroach, including identification, habitat and control methods.

The American cockroach has an average length of 1.5 inches and is a reddish-brown color. It is the largest species of cockroach found in the U.S.

They also have light-colored markings on their thorax. The center of the American cockroach's pronotal shield — the top part of the cockroach, just above and behind its head — tends to be light brown. Look for tell-tale yellow hues on the pronotal shield's edges to help differentiate this cockroach from other common species. This pest also has:

American cockroaches live in habitats with an abundance of food and water. They are commonly found outdoors in hollow trees, wood piles and mulch. They may find their way indoors while searching for food and water or when attempting to escape extreme weather conditions, such as heavy rain.

Common indoor habitats for American cockroaches include warm and moist areas of buildings. They are also found in sewers, drainage pipes and basements.

American cockroaches are known to move in large groups to avoid environmental disruptions (like the rain mentioned earlier), and multiple generations may even live in the same place together.

The American cockroach has a set of prominent wings. However, unlike many other cockroach species, they do not actually fly – rather, they really just glide.

However, there are rare cases in which the roach may attempt to fly. In such cases, it's typically only when the pest has been disturbed. Even then, it's less of a true flight and more like a gliding motion to another area away from whatever startled the insect.

All cockroaches have very strong mandibles (i.e. jaws) that can chew through material like thin plastic and cardboard. However, like all other cockroaches, there are no widely reported cases of American cockroaches biting humans or pets.

The saliva, the feces and the body sheddings from the insects may be allergens for sensitive individuals. This can trigger asthma and allergenic reactions resulting in wheezing, congestion, rashes, coughing and other symptoms.

Because of the unsanitary environments in which they live, American cockroaches can also carry and transfer pathogens, including viruses and bacteria, when they get into your food, and this may increase your risks of contracting a serious disease.

American cockroach populations can grow to large numbers over time. Males are extremely sensitive to a pheromone produced by female cockroaches. After mating, a female produces a small brown capsule, or ootheca, with 16 eggs. A single female is capable of producing anywhere from six to 14 egg capsules in her lifetime. Females lay their egg capsules near food sources and glue them to surfaces to secure them. These egg capsules are typically secreted in hidden, sheltered areas like in the corner of your baseboards, or simply deposited right on the floor.

The American cockroach's eggs hatch within five to seven weeks.

The average lifespan of an American cockroach is 90 to 706 days for females and 90 to 362 days for males.

Once the eggs hatch, white-brown nymphs (or baby cockroaches) emerge. As they get older, these nymphs slowly turn darker and darker until they take on the reddish-brown hue of the adult American cockroach. While smaller than a mature American cockroach, nymphs have the same body shape as the adult cockroach, although they don't develop wings until they're close to maturation.

This overall process typically takes as little as 9.5 months to as much as 20 months. According to Michigan State University, the average time from hatching to maturation is approximately 15 months.

On average, adult American cockroaches live for around 400 days. During this time, it's foraging for food and water, and constantly reproducing. The average female adult will produce approximately 150 cockroach eggs in her lifetime, and the population will continue to grow through her offspring.

Like other species of cockroach, the American cockroach will eat virtually anything. However, foods that these cockroaches are most attracted to include sweets, bread, fruit, cheese, beer, starch in book bindings, glue and hair.

American cockroach droppings might look like little bits of coffee grounds or darker grains of rice. They have more ridges and are more square, whereas rodent excrement tends to have a rounder, more oval shape. However, because their droppings are so easily confused with those of other pests, you may wish to consult with a licensed cockroach control expert so you don't accidentally misidentify your pest problem.

One of the first steps in helping prevent and control American cockroaches from infesting your home is knowing what attracts them:

Every cockroach species has its own distinct feeding and hiding behaviors, and the American cockroach is no different. This species is primarily attracted to high-humidity areas that contain decaying organic matter. Thus, they're most commonly spotted in the following areas in and around your home:

You can help identify areas in your home that may be infested by searching cabinets and crevices with a flashlight, or you can have a trained pest control professional perform the inspection. Additionally, you may place glue traps in suspected high-traffic areas. If cockroaches are present, they may be stuck to the strip after a few days. Of course, cockroaches are persistent pests that require year-round control. For the most effective control methods, consult a pest control professional.

How to get rid of American cockroaches

To get rid of the American cockroach and manage your cockroach infestations, you'll need a multi-step approach:

The American cockroach travels fast. Baits, insecticides, traps and other management methods won't suffice if you don't prevent new cockroaches from invading your space. Aim to:

You must practice proper cleaning and sanitization if you want to get rid of American cockroaches. This includes:

Traps and baits work to varying degrees. Instead of being your first tool for getting rid of American cockroaches, they should be seen as an add-on. Remember to:

When you may need a professional

If American cockroaches have moved into your home, call a cockroach control and prevention expert immediately. Because these pests excel at hiding and are not always easy to identify, you may need an expert to get your infestation under control. And since just one female American cockroach can lead to 150 new cockroaches in a year, it's imperative that you take proactive measures before the infestation spreads.

Contact Terminix® online or by calling 877.837.6464 today. Our local experts, backed by our nationwide network of resources and research, can help you to figure out the exact cockroach species you're dealing with. Our on-site inspections also allow us to create a targeted plan that's specific to every room of your home, so you can get rid of American cockroaches and keep them from returning.