Would you eat insects Would you pull up to the table for a plate of cricket flour cookies? 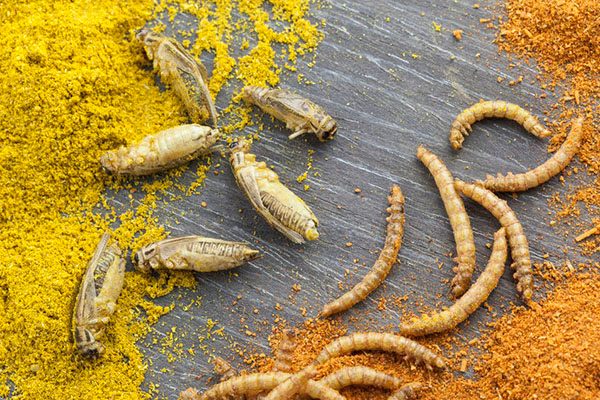 Here's a scene that could very likely play itself out in the near future. You open the door to your pantry to grab the supplies you need to make some of your special cookies. You open your flour jar, are disgusted with what you see and rush to your phone for help. "Hello, Terminix? Please come right away — I just found bugs in my cricket flour!

Hey, it could happen. There’s a revolution underway in the food industry — one that focuses on a source that doesn’t “baa,” “moo” or “cluck.” Rather, it chirps. That's right, people are actually eating insects for food, and this shocking new nutrition trend is said to be an eco-friendly contribution to our earth.

Far from a "gross out" gimmick for a television show, crickets and other edible insects are gaining popularity in the health food realm, and insect farmers are venturing outside the traditional food-for-animals business to consider raising the little jumpers for human consumption.

Special bakeries and food companies are adding cricket "flour" (insects are sterilized, roasted in an oven and milled into a fine powder) to everything from cookies and bread to energy bars and granola. Commercially available bug cuisine also includes snack foods, such as Larvettes — toasted mealworms available in barbecue, sour cream and onion, cheddar and "Mexican spice" flavors — among others. For dessert, you’ve got your traditional chocolate-covered crickets, grasshoppers or ants.

There are bug chefs writing bug cookbooks and, as with all things Internet, bug-eater blogs.

Why is the insect cuisine business suddenly hopping?

Actually, it always has been. As the saying goes, "There is nothing new under the sun." For as long as humans have existed, insects have been on the menu. Today, millions of people, an estimated one-third of Earth's population, engage in the practice of entomophagy (insect consumption), not for fun or as a fad, but for food. For centuries, people have relied on bugs such as crickets, mealworms, grasshoppers and other insects and arachnids for their primary source of protein.

Are crickets the new steak and potatoes?

Let's go back to crickets: They're high in fiber, "good" fats and protein. In fact, crickets are considered one of the highest sources of protein over more traditional items like beef. Those crunchy little bodies also contain the essential amino acids L-lysine and L-tryptophan. Lysine is essential for healthy growth and also to help your body convert fatty acids into energy, helping to lower cholesterol. And if you've ever slipped into a blissful post-Thanksgiving turkey coma, you’ve experienced the happy effects of tryptophan, which has been shown to aid mood and memory.

Edible insects are also shown to provide iron, magnesium, zinc and other important trace minerals, and according to food experts at the Food and Nutrition Blog, the numbers for these long-lasting, healthy minerals are stacking up.

Is it true that insects are one of the most eco-friendly meats?

Need another reason to dare to eat a bug? How about conservation? Sustainable living through "micro-livestock" farming leaves a much smaller environmental footprint, which could have a positive effect on climate change.

And a cricket farm doesn't require the destruction of a rain forest to make room for the livestock. Insect farming is an affordable, sustainable way of making a living. Cricket farmers don't go broke acquiring huge plots of land and keeping them fertilized, mowed and irrigated.

Are you brainstorming new, healthy food ideas, yet?

Not according to the United Nations. The U.N.'s Food & Agriculture Organization (FAO) started looking ahead to the year 2050, when an estimated 9 billion humans will be crowded onto this planet demanding food and water. In 2013, the org produced and published an exhaustive study on the subject of entomophagy: "Edible Insects - Future prospects for food and feed security."

The biggest hurdle the industry faces is what's been termed "the ick factor," a "cultural taboo" against the idea of eating insects. For many North Americans and Europeans, the idea of willingly eating bugs is still repulsive, even though most of us are aware that the Food & Drug Administration allows a certain amount of bugs and bug parts in packaged foods.

So, would you eat insects? Would you pull up to the table for a plate of cricket flour cookies? Can you get past the "ick factor," or is the notion of crunching an exoskeleton between your teeth too much for your stomach and brain to process?

As crazy as it sounds today, perhaps there will come a time when you need help with pantry pests crawling through your cricket flour. Or mealworm flour. Or crunchy grasshopper bars. As health food trends shift and demand for eco-friendly food sources rise, you never know what you'll be craving. Besides, you're probably already eating bugs today.

If your home is looking more like a cricket farm than you're comfortable with, though, give us a call. We know not everyone's favorite cookies feature specially farmed bugs in powder form. Our techs are more than happy to give you a visit to assess the crickets and provide possible solutions.