The Life Cycle of a Honey Bee

There are thousands of species of bees, found all over the world—but only about seven species of honey bees. Of those seven species, the western honey bee is the most common species, and it can be found on every continent except Antarctica. The western honey bee is domesticated, and beekeepers tend to them for honey production and crop pollination. Like many insects, honey bees have four major life stages: The egg stage, larval stage, pupal stage, and adult stage. Keep reading to learn more about the honey bee life cycle, and what occurs in each stage. 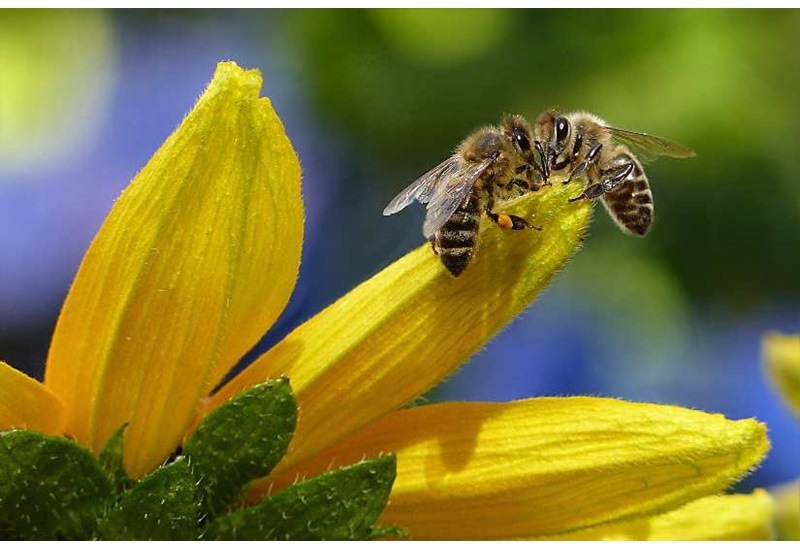 Honey bee eggs are laid in wax honeycombs. The bees will eventually become either drones or sterile female worker bees. When the eggs are laid, the queen bee can either choose to fertilize the egg or not—and that’s what decides what caste the bee will belong to. The caste is the social structure that all honey bees follow, with each hive member having specific responsibilities they follow in order for the hive to run smoothly. Drones are slightly larger than worker bees, and so require a larger cell. Fertilized eggs become female worker bees, while unfertilized eggs become drones. Like other insects, bees are able to lay large numbers of eggs in short periods of time. In fact, one queen bee can lay up to an average of 1500 eggs a day.

Three days after bee eggs are laid, they hatch, and the bees enter the larval stage. Bee larvae are small and white, growing rapidly. In fact, they shed their skin five times during this stage in the bee life cycle. The larvae are essentially helpless, without legs or even eyes. They remain in the same cells where they hatched from the egg, and have to rely on worker bees to feed them. Bee larvae have voracious appetites and eat continuously throughout the day. First, they start on a meal of royal jelly produced by nurse bees. Queen bees also feed on this same jelly. After a period of time, larvae go from eating royal jelly to eating a mixture of honey and pollen. After approximately five days of nonstop eating and growing, honey bee larvae are sealed in their cells with wax for the next stage.

Within their sealed cell, the larvae enter the pupal stage of the bee life cycle. During the pupa stage, what was a small white larva starts to develop into the honey bee that you would recognize. The wings, legs, and eyes form. After just over a week, the new adult bee chews its way out of the wax covering of its cell to enter the hive. The caste of honey bee determines how long the bee takes to develop in its pupal stage . Drones take the longest to develop in their pupal stage, followed by female worker bees, followed, finally, by the queen bee.

Adult honey bees emerge from their cells knowing exactly what their role will be in the hive. The strict caste system is why honey bees are able to function so efficiently. The caste of the adult honey bee also determines what size they’ll be. Queen bees are the largest, at around three-quarters of an inch (20mm), followed by drone bees and worker bees. Those are usually around half an inch (15mm) in size.

In just under a month, honey bees go from being laid as eggs to emerging as fully formed bee adults. Like many other bees, honey bees operate in colonies. Each bee caste member, from drone to worker bee, plays an important part in a properly functioning colony. Colonies are built around one fertile female bee—the queen bee. The queen bee begins her life in the same way that other female workers start their lives. However, queen bees are never weaned off royal jelly to the mixture of honey and pollen that other bees receive. The queen bee will then develop a full reproductive tract, unlike the other female worker bees, which are sterile. Despite the colony only having one queen bee, it can still be made up of thousands of bees—even tens of thousands of bees. The bees communicate through a variety of ways, including through pheromones and a complicated language relying on dance.

While bees are necessary to life on earth, and honey bees in particular are extremely important because of their ability to pollinate, they can pose a danger if threatened, especially to those that are allergic. People that are allergic to bee stings can react in just a few minutes. Bees can be dangerous if threatened, but there are suggested guidelines to avoid stings since honey bees are important pollinators.