The Difference Between Moles and Voles

Have you noticed your yard becoming overrun with unusual circular holes or small runways crossing it? If yes, it’s possible the damage is being caused by lawn pests such as moles or voles. Though their names and certain physical features bear a resemblance, these pests can cause significantly different levels of destruction to your yard’s turf and other vegetation. Because these burrowing habits can cause damage, it’s important to know how to identify the differences between moles and voles so you can help stop them 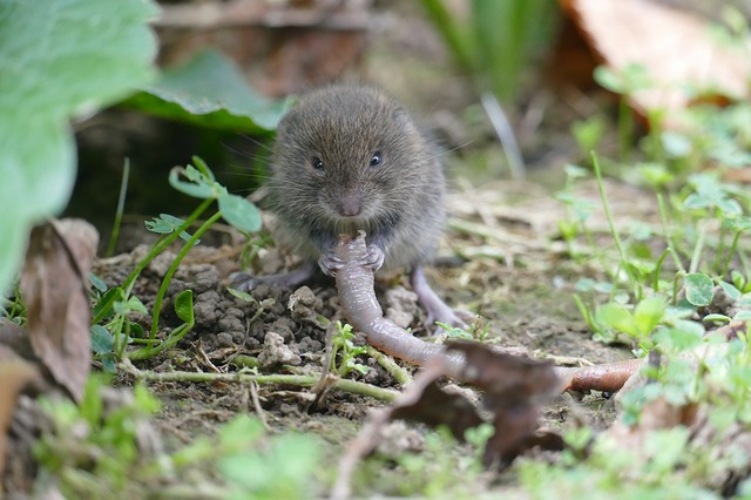 While these pests do have a few similarities when it comes to their behavior and preferred habitat, there are also marked differences that distinguish the two. When moles burrow into the ground, they create larger holes that measure two or more inches in diameter. Digging through the dirt causes these pests to push piles of soil onto the surface, which can result in volcano-shaped mounds appearing sporadically across a lawn. From these starting holes, the moles then dig a series of tunnels that exist just underneath the ground’s surface. Areas of a yard with mole damage will feel squishy and unsupported and may collapse when stepped on.

In contrast, some species of voles create shallow burrows as they dig, often on the surface of the ground or in a slight depression, though others may also use the burrows of moles, rats, and other animals. These pests tend to prefer to travel above ground from hole to hole. Over time, the movement between burrows and holes results in damage to the lawn and can ultimately cause pathways to form between the holes. This damage is frequently most noticeable after snowfall, once the snow has melted. Through most of the year, their activity is under covered areas, like tree canopies or shrubs, which is why you may not notice them in your yard.

Moles are one of the most distinctive lawn pests when it comes to their appearance. They can be easily identified by their long, pointed snouts and large, clawed forefeet that help them dig through different levels of terrain. These pests’ bodies can measure up to seven inches long and are covered in short, silky fur that allows them to travel both forward and backward through their tunnels. Their brownish-gray fur covers their small, nearly undetectable eyes and ears.

Voles, on the other hand, may sometimes resemble mice. In fact, the two pests are often confused for the other. Both are small rodents, but voles tend to measure five to seven inches in length from the top of their head to the base of their tail, while mice only measure approximately two inches in length. Like moles, voles grow a range of gray to dark-brown colored fur. But unlike moles, voles grow short, thin tails that grow to be about ¾-inch long. A vole’s forefeet are characterized by skinny, agile claws that allow them to grasp and eat flower stems and small blades of grass.

Moles are carnivores and maintain a diet that primarily consists of adult insects and garden pests. They can eat up to 60% of their body weight in smaller pests each day; for this reason, the presence of moles can be beneficial to homeowners with major pest problems in their garden. However, their tunneling habit means mole holes often serve as entry points for smaller creatures, like voles, who can use the tunnels as burrows.

As herbivores, voles are on the opposite end of the spectrum. When hiding underground, these pests will chew through the roots of large plants. Though their primary meal is made of blades of grass, voles also eat many garden crops, like sweet potatoes, carrots, and tomatoes. Their winter runways can lead to major lawn destruction, which is noticeable after snow melt. This damage normally recovers once the voles retreat to covered areas.

Why the Differences Are Important

Knowing how to identify moles and voles based on their behavior, appearance, and diet can help you determine which pest is terrorizing your lawn. Keep in mind their feeding preferences when you try to identify the pest; moles typically only eat insects and grubs, which means a yard ridden with moles should not house many harmful pests A yard hosting voles, however, may start to see surface runways covering the lawn, which can result in areas of dried grass and damaged plants.

If your yard is hosting either of these pests, it’s recommended to call a professional before attempting to use a DIY solution. DIY rodent control can vary in effectiveness, waste both time and money, and may put you at risk of coming into contact with rodent droppings, which can carry pathogens that may cause disease.