Going on safari? The tsetse fly — or sleeping sickness insect — is one creature to be avoided. 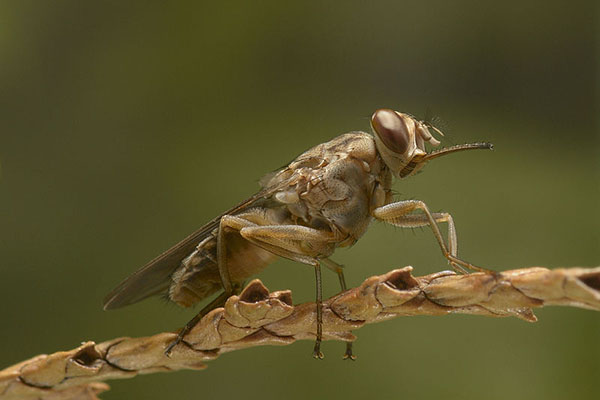 If you live in the United States, chances are you haven’t heard too much about African trypanosomiasis, also known as African sleeping sickness. In fact, you may not have heard of it at all, unless you and your family are avid travelers. However, if you’re planning a trip to Africa — or know someone who is — you should read up on this disease and know which insect causes sleeping sickness before boarding your plane.

Below you’ll find an introduction to the tsetse fly — the insect that transmits African sleeping sickness — and the disease itself.

The tsetse fly is a member of the housefly family that’s only found in rural Africa. It’s important to note that not all tsetse flies carry sleeping sickness.

Unlike the houseflies you’re familiar with, the sleeping sickness insect is an ectoparasitic bug that feeds on blood, and it's not picky about what kind of blood. Humans, domesticated animals and wild animal are all enticing sources of a meal for the tsetse fly.

The tsetse fly is larger than our common housefly, too. It can be anywhere from 0.2 inches long to 0.6 inches long. When it comes to coloring, there’s nothing too extraordinary about these insects. They tend to be different shades of brown, and some have bands around their abdomens.

The flies have a proboscis they use to pierce the skin of food sources and drink blood, much like a mosquito. The also have a unique set of antennae that are short and fringed. The antennae are set towards the base of the eyes and almost look like thick lower lashes.

Where is African Sleeping Sickness Found?

As the name suggests, African sleeping sickness is only found in Africa.

There are two different types of the disease. East African sleeping sickness is the less common variation of the illness. CDC findings show that 95 percent of reported cases are from Uganda, Tanzania, Malawi and Zambia.

What Are the Symptoms of African Sleeping Sickness?

Sleeping sickness can be very serious.

Each case will vary, but untreated individuals with sleeping sickness can experience mental deterioration, hormonal imbalance, neurological issues, paralysis and personality changes, according to the CDC.

Additionally, cases in which people do not seek treatment can result in death in a matter of months. If you do suspect you’ve been bitten by a tsetse fly, the CDC states that you should see your doctor immediately. Sleeping sickness can be treated with medication.

So what are the symptoms?

First, you’re most likely going to know if you’ve been bitten by a tsetse fly. The sleeping sickness insect has a painful bite that can turn into large red sores called chancres, the CDC says.

Now, lets break down the symptoms of the two different forms of the disease, according to the CDC:

Symptoms typically show up within one to three weeks of being bitten.

Symptoms are minimal or intermittent during the first few months of infection. Bites can develop into sores within one to three weeks.


How Can Travelers Prevent Sleeping Sickness?

According to the CDC, there are no vaccines or medications that can be used to prevent sleeping sickness. However, there are some steps that can be taken to lessen your chances of being bitten:

Make sure arms and legs are covered, so you limit the amount of skin that’s exposed to potential bites. Also, tsetse flies can pierce light fabrics, so opt for medium-weight clothes.

While there are no known repellents for these insects, they are attracted to bright colors and very dark colors. Wearing neutral-colored clothing is your best bet if you’re traveling in areas in which sleeping sickness is a possibility.

The flies are drawn to moving vehicles. Do a sweep before climbing in to limit exposure to the insects and their bites.

The sleeping sickness insect tends to feed in the daytime. But during the hotter parts of the days, tsetse flies are less active. However, they will bite if disturbed, and bushes are some of their favorite resting places.

The CDC also notes that you should still use insect repellent. Though your sprays or lotions won’t deter the tsetse fly, they could ward off other insects capable of transmitting disease or infection.

But there’s no harm in being prepared when you’re traveling the world. And now that you know which insect causes sleeping sickness, make sure to spread the message to your globetrotting friends so they can have safe travels, too.