Mole crickets can be a nuisance to people’s yards, causing hassle and damage. Controlling these pests starts with knowing their identity and behavior. 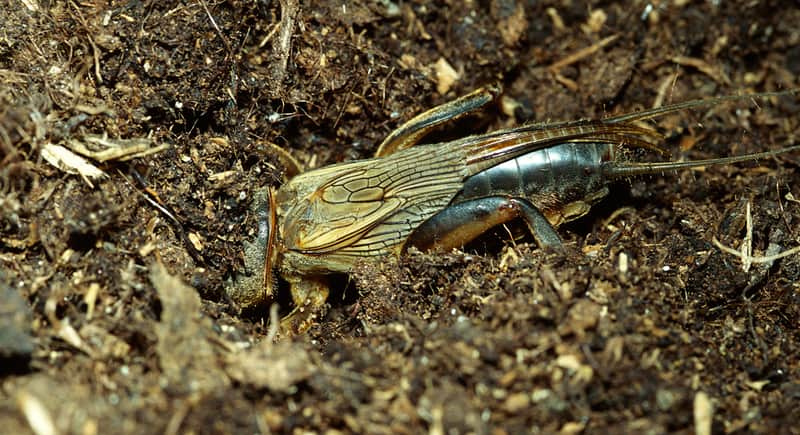 Mole crickets can be a nuisance to people’s yards, causing hassle and damage. Controlling these pests starts with knowing their identity and behavior.

What is a Mole Cricket?

Mole crickets belong to the family Gryllotalpidae and can grow up to one and a half inches long. The seven species of mole crickets found in the United States are usually brown or tan in color, and they are characterized by their unusual front legs. Known as fossorial (digging) legs, their front legs are armored with claw-like protrusions called dactyls that can easily bore into soil. As the name might suggest, mole crickets slightly resemble and behave like moles, digging complex underground tunnels. These nocturnal creatures commonly damage turf grass on lawns and golf courses and are considered a huge pest in many regions of the United States.

Why are Mole Crickets a Common Pest?

Mole crickets are an invasive species that were accidentally brought to the United States from South America by cargo ships. With very few natural predators, they breed and feed freely with their populations growing unrestricted unless there’s outside interference.

What Times are Mole Crickets Most Active?

There is only one generation of mole crickets per year, with adults causing the most damage between August and October. Peak season for mole crickets varies depending on your location, as well as the species of mole cricket in that area. Because these pests are nocturnal, they will rarely be seen destroying your yard. Instead, you may notice the incriminating evidence this pesky bug leaves behind.

How Do Mole Crickets Damage My Yard?

These pests can damage turf grass by leaving scarred, elevated burrows on the topsoil. Patches of dying grass are also an indicator of mole cricket damage.  Adult and nymphal stages of mole cricket also feed on the root system of grasses; however, their feeding is not considered as damaging to turf grass as compared to their extensive tunneling.  Some tunnels made by mole crickets have penetrated up to 30 inches below soil.

Aside from just mole crickets inflicting damage to your yard, other critters may further the problem by attempting to dig up mole crickets from their existing tunnels. Raccoons and armadillos are typical wildlife that may attempt to snag the bugs as a tasty treat, causing greater harm to your grass in the process.

Can Mole Crickets Hurt Me?

Mole crickets are harmless to humans directly, but do pose a threat to your lawn. They are rarely found in homes because there is typically no appealing food or hiding places for them. They thrive in areas of darkness, soil and grass that serves as a food source.

How Do I Know If My Yard Has Mole Crickets?

Most species of mole crickets are found in warmer climates, like the southeast United States. Some species, such as the northern mole cricket, can be found commonly distributed as far north as New York and Michigan.

To learn about crickets that can infest your home, read “Are Crickets Harmful?”

Next > Why Are Bugs Attracted to Light?

Tanner Felbinger is a current sophomore at the University of Florida. She’s an Entomology & Nematology major with a minor in Sustainability and plans to attend grad school for Entomology after she completes her undergraduate degree. At school, Tanner is involved in the Entomology Club, teaches group fitness classes at the campus gyms, and is an ambassador for the College of Agricultural and Life Sciences. She is an undergraduate research assistant in Dr. Phil Koehler’s Urban Entomology lab and focuses on control methods for bed bugs. When she’s not in class, Tanner enjoys being outdoors, listening to music, and practicing yoga.