A number of individuals enjoy bird watching as a hobby or in some cases, even as a profession. However, some bird species are considered a nuisance in residential and/or agricultural settings and are also referred to as pest birds. 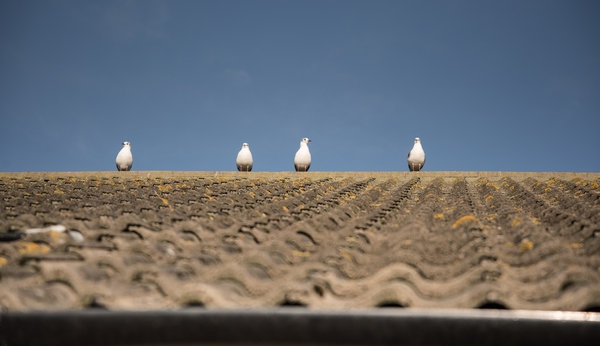 Why Do Woodpeckers Peck Wood?

When woodpeckers are searching for tasty insects to eat, they often peck on dead/dying wood in order to extract the insects. Some woodpeckers also eat sap from trees that can be obtained by pecking open an entry point. Pecking of woodpeckers can also be used to attract a mate, to signal territorial boundaries or for hollowing out tree cavities to make a nest.

Why Don't Woodpeckers Get Concussions?

Did you ever wonder why this pecking activity does not cause injury (e.g., headaches, concussions) to the birds? Woodpeckers have thick neck muscles that allow them to peck at extremely high speeds. They also have a characteristic third eyelid that keeps their eyes intact. This eyelid closes just before pecking impact. But what about their brains? How are they protected from hitting the skull and causing injury?

The thick spongy bone that surrounds the woodpecker brain, which is especially prominent in the front of the skull, is one way the brain is protected (Wang et al. 2011). The small size of the woodpecker brain, the large surface area that comes into contact with the skull and the brief duration of each peck may also play a role in their ability to peck at such high velocities without injury. Some suggest that the way the brain is oriented in the woodpecker skull (different than humans) and/or the beak absorbing some of the blow helps soften the impact. Researchers determined that woodpeckers with upper and lower beaks of uneven lengths showed less impact on the head compared to birds with beaks of equal length (Wang et al. 2011).

Woodpeckers also have a long tongue that provides pressure on the jugular vein, hence increasing blood flow and the size of the brain. This means there is less “wiggle room” between the brain and the skull. It is known that, at high altitudes, blood from the brain returns to the body at a slower rate than at lower altitudes, hence providing a protective effect similar to the woodpecker’s jugular vein pressure.

How to Help Prevent Woodpecker Damage

Woodpecker damage can often be prevented by installing netting over protected fruits and parts of houses of interest to birds. Homeowners may decide to hang shiny metal streamers or reflective tape to distract and/or scare away the birds. Stationary or moving plastic owls and/or rubber snakes may also be an effective, yet often only temporary, deterrent. Loud noises (e.g., banging pots/pans together) may scare birds away, in some cases.

All woodpeckers are federally protected as nongame birds. Some species of woodpeckers (i.e., red-cockaded woodpecker, ivory-billed woodpecker) are listed as endangered species. Hence, wildlife officials (e.g., United States Fish and Wildlife Service) must be consulted before attempting to remove these birds and/or their nests.

If woodpeckers are pecking your house, you may have an underlying insect issue, potentially causing damage to the home, as the birds are likely seeking food. Woodpeckers may be looking for carpenter bees, leafcutter bees or other insects that are inhabiting your siding. Pest control professionals can be consulted in order to assess the extent of potential insect issues and assist in designing/implementing a control plan. If the insect issues are properly addressed, it is possible that the woodpecker issues will cease.

European starlings were introduced into the United States a century ago. They nest in tree cavities and/or holes in buildings and are found in residential and farm settings. Starlings compete with woodpeckers for nesting cavities. During cold seasons, starlings may roost indoors (e.g., barns) in large numbers, hence causing a nuisance. Blackbirds and starlings may be found roosting together in some areas. Most starlings live in the same area year-round (depends on geographic region); however, some are migratory. Starlings feed on fruits, seeds, and insects.  These birds may also cause damage to fruit (e.g., strawberries, grapes) and corn crops. Livestock farms may find starlings as a nuisance as they often eat livestock food. Starlings will also feed on scraps of food in open trash cans, hence covering trash cans can mitigate this issue.

Large numbers of starlings roosting in residential settings can result in health issues due to excrement, noise, and odor issues. Histoplasmosis, a respiratory disease caused by fungus that is found in soils near bird roosts, can pose a public health risk. Starlings are also capable of transporting bacteria such as E. coli, Salmonella spp., and Campylobacter jejuni from farm to farm (e.g., dairy, swine farms), hence causing a public and veterinary health risk. Studies have shown that removing manure from farms more frequently (daily compared to weekly) resulted in a lower probability of starling issues.

Furthermore, if starling flocks containing an abundance of birds are present near airports, this can cause a safety hazard due to the possibility of jet engines colliding with large numbers of birds. In some cases, starlings (via bird feces) have been implicated in the transmission of gastroenteritis virus from one swine farm to another. Passerine birds, such as starlings, are possible reservoirs for encephalitis-causing viruses (i.e., Eastern equine encephalitis, St. Louis encephalitis, West Nile encephalitis). A competent mosquito vector is required for transmission of these viruses to humans or other animals.

Starlings, as well as other birds, can be excluded from homes and barns by properly and professionally sealing open entry points. If birds are found roosting on ledges, coverings of plexiglass, metal or other material can be used to help deter birds from landing in these locations. Netting can be used to cover fruit trees; however, this may not be practical for large areas of land. Professionally pruning and thinning branches where starlings roost in trees may reduce the suitability of the sites for bird nesting.

Sound-producing devices designed to frighten birds and/or lights in roosting areas may be employed. Deterrent methods used before a bird population becomes accustomed to a site are most effective.