If you see a small, worm-like insect crawling across your floor, you might have millipedes in the house. Or, you might have centipedes. These two invertebrates are often confused by people, and each have their own benefits when found in nature. 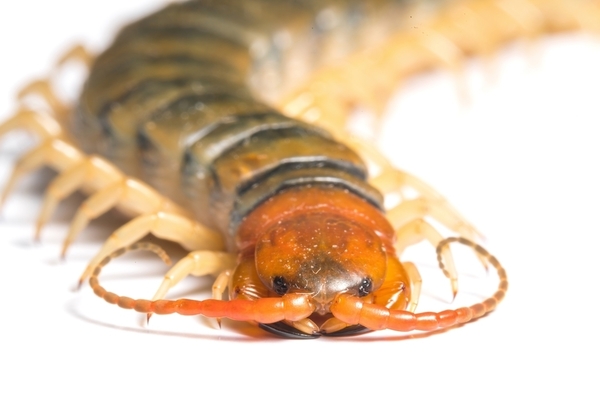 Before we get into the basics between them, let’s answer a couple of quick questions.

With that out of the way, let’s take a look at these creatures and their benefits. When it comes to millipedes, facts show that these many-legged invertebrates help with plant decomposition.

Millipedes are usually brown. Their bodies are an elongated, cylindrical shape that can sometimes appear flat. Adults can be one-half of an inch to 6.5 inches long. Despite their nickname, “thousand-leggers,” most have fewer than 100 legs. Even with all of those legs, these arthropods move slowly. When provoked (or resting) millipedes will curl up.

Centipedes are also typically brown. They have elongated bodies but appear flattened instead of cylindrical. Adults of the most common species are more than an inch long, and they have an average of 30 legs — not the 100 legs that their name would suggest. Their legs are longer than millipede legs, which enables them to move quickly across surfaces. Centipedes do not curl up when bothered.

Millipedes in habitats versus centipedes

They are often found in mulched areas, under dead leaves or woodpiles and in gardens or areas where organic matter is present. They eat dying or decaying plant matter and only rarely pose a threat to healthy plants. Millipedes may sometimes wander indoors in search of food or shelter but usually die, due to lack of moisture.

If you are seeing millipedes indoors in large numbers, you should check for water leaks and cracks in exterior walls. It is also possible that your home is in the path of a millipede migration. If that is the case, there is not much you can do, other than removing millipedes as you find them.

Centipedes seek out hiding places that are moist and dark. This means you may find them below stones, in mulched areas or under piles of wood. Indoors, centipedes are sometimes found in areas where insects are present, including damp locations in bathrooms, closets and basements. They are nocturnal and hide during the day. Unlike millipedes, centipedes eat insects instead of plant matter. Common insects eaten by centipedes include: cockroaches, flies, crickets and other small insects.

Controlling and preventing millipedes or centipedes

Millipedes found indoors can be swept back outside or vacuumed up and disposed of. Centipedes can be removed the same way, but care should be taken to avoid touching them, lest they bite.

Outdoors, removing the habitat for both invertebrates can reduce their numbers. This can be accomplished by moving leaves, mulch and woodpiles away from the home’s foundation. You should also check for areas where moisture builds up and eliminate them.

Centipede numbers will also decrease when their food source is removed (both indoors and outdoors). Both millipedes and centipedes are considered beneficial, due to their role in plant decomposition and insect control.

If you are seeing large numbers of millipedes or centipedes in your home, it could mean you have a moisture problem. Go online to get your FREE Pest Estimate and find out how Terminix® can help you.