Stan Cope is Terminix International’s director of entomology and regulatory services. He talked to The Buzz Blog about his globe-trotting career and today’s headline-grabbing mosquito issues, and offered some tips to help avoid mosquitoes inside your house and out.

Cope spent more than 23 years in the U.S. Navy, helping protect deployed troops from the ravages of insect-borne diseases. He retired in 2012 with the rank of captain after serving in a variety of posts, including director of the Armed Forces Pest Management Board and director of Defense Pest Management in Washington, D.C., where he oversaw all aspects of pest management for the U.S. Department of Defense.

Cope is a recognized expert on the history of medical entomology and yellow fever. He also currently serves as president of the American Mosquito Control Association.

Stan Cope: I wasn’t the classic bug kid. I didn’t have a bug collection and bugs didn’t fascinate me. I really didn’t get into it until I was in college and even graduate school, and I’m not really the classic sort of entomologist. My real interest is tropical medicine and infectious diseases, which is what my Ph.D. is in, but focused on those diseases that are spread by insects, primarily mosquitoes. Mosquito-transmitted diseases are really my specialty. So, I didn’t really get into all of that until my master’s degree and probably more so my Ph.D. 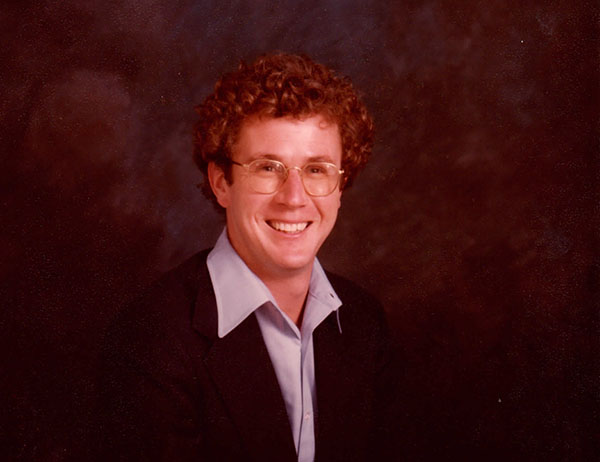 Young Stan Cope. He insists the curls were all natural!

SC: I’m an epidemiologist and my wife is an infectious disease epidemiologist, though she’s not currently practicing. My family’s full of medical doctors, and I got tired of explaining the difference, so I came up with something that is easy to remember — a medical doctor is too busy pulling people out of the river instead of looking upstream to see why everybody’s falling in, and that’s what an epidemiologist does. It’s population-based medicine instead of individual.

Q: So you got your Ph.D., and THEN you went into the Navy in 1988 — that seems like a later decision than most people make to join the armed forces. How did that come about?

SC: There are about 140 uniformed entomologists in the Department of Defense. It’s a big group of people in the Army, Navy and Air Force. And the UCLA lab that I ended up entering had produced several of them who were in the military. They would stop in frequently, usually as they were transiting back and forth to the Pacific. So there was a lot of exposure for me to both Army and Navy. So I saw this as a career opportunity, and it seemed exciting and seemed like something I could do. and I had my choice of the Army or the Navy and, you’ll never believe it, but I picked the Navy because I thought I’d look better in the dress blue uniform of the Navy than in the Army green. It turned out I was right.

I never pictured myself going into the armed forces, but it’s a really exciting career as a military entomologist. It was very fun.

Q: Were you focused mostly on mosquito-borne diseases?

SC: Well, all types. Anything spread by ticks or sand flies. … Another big area that we dealt in was venomous animals. The Marines will storm a well-fortified machine gun nest, but throw a six-foot snake in front of them and they might pass out. We spent a lot of time educating them in the field and before they would go to places about what might bite them and what might sting them, and they always want to catch two of each of those, put them in a box and see which one is toughest.

My last four years, I ran a thing called the Armed Forces Pest Management Board, which oversees all of the training, licensing and certification for all the DOD pest controllers, so I was literally the head bug guy at the Department of Defense.

Q: Can you go tell us more about what you do at Terminix?

SC: When I first came to the company, I was brought in basically to be a public health entomologist because there aren’t a lot of those in pest control, it’s almost all what we call "structural," which is cockroaches, termites, ants, things like that. So Terminix knew they wanted to start this mosquito program, so I was basically brought in to help with that. … I now have about 30 people working for me, and we are known as Entomology and Regulatory Services. We have three basic pillars of what we do: training, technical support to all of our branches when they have a problem or something they can’t handle, and the other part that’s very, very important is regulatory — primarily making sure that all of our people are properly licensed and trained to do what it is they’re doing.

Q: Does anything excite you about the future of the industry? And is anything keeping you up at night, so to speak?

SC: With a lot of the recent events, a lot more people are going to be wanting mosquito control, and we’re very well positioned to provide that because there are a lot of what we call “mosquito abatement districts” that have tax funding and they drive the trucks through the neighborhood and that type of stuff. But that doesn’t really have any effect on what’s going on in someone’s backyard when it comes to mosquito control, quite honestly.

That’s something I try to teach our sales people. I tell our technicians, “You don’t sell pest control,” and they look at me like I’m nuts. I say, “You sell peace of mind and quality of life. That’s what the customers are buying from you. The vehicle happens to be pest control.” And I try to promote that message so that our folks realize they’re doing more than just going in and killing bugs. There’s a lot more to it as far as the customer is concerned.

I’m not a big worrier, so I don’t lay awake at night wondering “what if.” I was in a near-fatal helicopter wreck several years ago in Venezuela, and ever since then, there’s just not a whole lot of stuff in life that’s really that super-critical as far as I’m concerned, because I’ve seen the end. I mean, we smashed into a power line and we were all going to die and then we didn’t, so not a lot of things keep me awake at night.

SC: Well, I’ve been talking a lot about this lately, and, my standard answer in a nutshell is that Zika’s getting a lot more attention mainly because of this perceived connection with birth defects. We’ve had two other diseases in the past several years do the exact same thing that Zika did, which is basically break out of its normal cycle, generally in Southeast Asia, through infected travelers who come across the Pacific, and end up in Central, South America and the Caribbean and result in these fairly large outbreaks. The other diseases are dengue fever and one called "chikungunya," and they’re spread by the exact same mosquitoes. They’re both viruses – the diseases in people are a little bit different, but the key point is that all three of those nasty things – the only animals they live in are only live in monkeys and humans, as far as animals are concerned. This is unlike West Nile virus, which came into the United States in 1999, but it infects a wide range of animals, and that’s why it’s established all across the country and it’s never going to go away. The Zika virus and some of the others will never do that because we don’t have the proper animal hosts for them here – we don’t have monkeys, and so it can only live in people and that tends to burn out.

See Also: Get the Facts about Zika

Q: Is there anything you recommend to people that’s simple and easy that can limit mosquito populations around the house?

SC: We talk about two major areas: one is source reduction, which basically means checking your property to make sure you’re not breeding any mosquitoes. Particularly in the case of Zika, the mosquitoes that spread that are types that like to breed in artificial containers, like cups, tires, bird baths and kids’ toys that are left in the yard. They’re very specific to those types of things. So if people keep their yards cleaned up, they’re much less likely to have these mosquitoes in their yard. That’s called "source reduction."

And then the other thing is called "personal protection." That includes using repellents — always EPA-registered repellents, I might add — and protective clothing (which means basically long-sleeve shirts and long pants) and limiting their time outside, if they can. Making sure the screens on their homes are in good repair. Making sure, in the evening, that the kids don’t have the doors propped open and stuff like that where mosquitoes are going to come in.