How To Get Rid of Bees Near Your Home

While bees are a necessary part of our agricultural system, you probably don’t want them buzzing around you and your family. Learn how to get rid of bees. 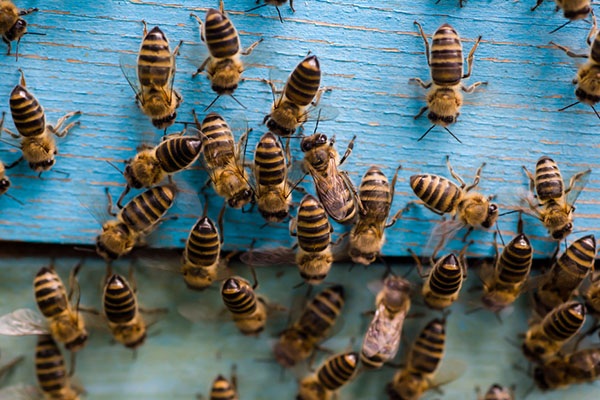 Bees are pollinators and are a necessary part of the agricultural system. However, that doesn't mean you want them buzzing around your home or family. Bee removal can be a challenge, and knowing how to get rid of bees depends on a variety of factors.

Social bee species are organized by a caste system. The queen bee runs the hive. She also lays the eggs for the colony. Drones are next: These male bees exist to mate with the queen and are usually present from late spring to early summer. All worker bees are females and are the smallest bees in the hive. They are the largest group found in the hive, and are responsible for keeping it running smoothly.

American bumble bees, Bombus pennsylvanicus, are similar in appearance to the carpenter bee. They are one-half of an inch to 1 inch long, have black behind their wings and may have up to three yellow stripes along their bodies.

The fuzzy hairs that cover bumble bees allow them to pick up and carry pollen back to their hives.

These bees are often found in fields, woods or parks. They make honey with the pollen they collect, and use it during the winter months when other food is not available. However, people are not able to eat the honey produced by bumble bees.

Bumble bees often build their hives at ground level. These hives can be found in holes abandoned by small rodents, under sheds or in compost piles. They may also build hives in trees or birdhouses. Bumble bee hives are much smaller than honey bee hives. A large hive may only have about 400 bees, whereas honey bee hives have an average of 50,000 bees.

Both worker and queen bumble bees are able to sting, but they will only sting when attacked or provoked. Unlike the honey bee, a bumble bee can sting multiple times and will survive after stinging you.

Honey bees, or Apis mellifera, can be found near homes where beekeepers have cultivated hives for honey production.

The hives can be located in hollowed-out trees, logs or even fence posts, as well as inside beekeeping hive boxes. While it is rare for honey bees to build a hive inside a home, they have been known to do so in attics, walls or crawl spaces that were not secured.

Worker bees are known to sting when provoked. Because their stinger has barbs, it attaches itself to the flesh of whatever the bee has stung. When the bee pulls away, the stinger remains in the victim and pulls out of the bee's body. This kills the bee.

Carpenter bees, part of the genus Xylocopa, are also commonly referred to as wood bees. They are often confused with bumble bees, as both are black and yellow and are one-half of an inch to 1 inch in length. Unlike bumble bees, carpenter bees are not as fuzzy, and the topside of their abdomen is a shiny black. These bees also have a black dot on the top of their thorax.

They are solitary bees and are not as social as their honey-producing relatives.

It's common to find them in parks, woods and fields, as well as around homes with gardens.

Instead of hives, they burrow into wood surfaces to build galleries in which they raise young bees, but they do not eat the wood they’ve tunneled through.

When carpenter bees find a good spot, they first drill a round, one-half of an inch wide tunnel into an outer wood surface. This entry point may be found in eaves, rafters and attics in addition to trees, telephone poles or fence posts. From that initial opening, they will create galleries (similar to short tunnels) in which to raise their young. These galleries are placed in a tunnel drilled at a 90-degree angle to the entry hole. It can be up to 1 foot long, with eggs packed with pollen in three-fourths of an inch long chambers within it. The bees also hibernate in these galleries over the winter months.

While they will not cause a lot of damage at first, as their numbers grow, carpenter bees excavate more nests in the structure. They also drop pollen around the entry hole as they carry it in to stock the egg chambers. This can lead to stains on the wood's surface.

Most of the carpenter bees seen near homes and wood structures in the spring and summer months are males. While they may chase people, they are not able to sting. Because of a large, whitish spot on the front of their heads, they are often called "white-faced bees." Female bees can sting, but will only sting if they are handled or the hive is attacked.

If a carpenter bee is buzzing near humans or other insects, it is likely that they are close to the nest. Male bees hover outside to protect it, and buzz near potential threats.

Bees scavenge for food, usually pollens. Honey bees, in fact, may travel several miles from the hive each day in search of food sources.

While they primarily need pollens, bees are also attracted to sweet foods. This includes things like ice cream, soda, fruit and juice.

One way to cut down on their appearance near your home is to remove these food sources. This may mean taking out the trash more often, cleaning out trash cans regularly and minimizing open food containers when you are outside.

For carpenter bees, another option is ensuring that all outdoor wood surfaces are painted or treated. Carpenter bees prefer unpainted wood, and are less likely to burrow into other surfaces.

There are a variety of treatment options to remove bees, ranging from hive removal to options such as carpenter bee traps. A carpenter bee trap tricks bees into entering through a small hole in a piece of wood. The bee then falls into an empty plastic bottle. This is not an effective method for bee control, as it will not treat the source of a bee problem. You will trap some bees, but will still have the infestation to deal with. It is also generally not recommended by beekeepers, pest management professionals or entomologists, as bees are beneficial pollinators and should be relocated, rather than killed.

Other methods for bee removal include vacuuming out a hive or covering it with a plastic tarp and letting the sun heat the hive to temperatures that bees cannot survive. These methods are ineffective and can be dangerous as they will most likely just result in a lot of angry bees trying to sting you.

The best solution for bee removal is to call a beekeeper or a pest management professional. They have the necessary protective gear and are well versed in what methods work for the type of bee you have near your home.

What not to do

It is important not to seal the exit hole of a honey bee colony. Bees, like wasps, will find another way out and it may be inside your home
Hives that contain honey should be removed from the home professionally. If a hive is not removed before the wax decays, the result could cause structural damage, not to mention a honey-waxy mess. It will also attract other hungry insects who will eat the honey when the bees are gone.

Children, pets and other people should never be around when you are attempting to treat a bee problem, and a protective bee suit should be worn. Again, the best way to handle bee removal is to call a professional.

Some source say bees are more aggressive on windy and cloudy days, as they cannot hunt for food in those conditions. However, bees can be short-tempered in any weather conditions, and should always be approached with caution.

Do not use bright light if working to remove a hive at night (when bees are less active). Use a red light to avoid agitating the bees. Bees are just as ready to sting at night as they are during the day if they feel that the hive, or themselves, are threatened.

Tread softly near ground hives, as vibrations from heavy footfalls can irritate a colony.

While these options may remove unwanted bees from your home, the best solution is to call a local beekeeper or a pest control professional. Terminix® Service Technicians are trained to properly remove bees from around your home.