Knowing a few basic bee facts may help you better understand bees and how to avoid being stung. Here are a few common and not-so-common myths about bees. 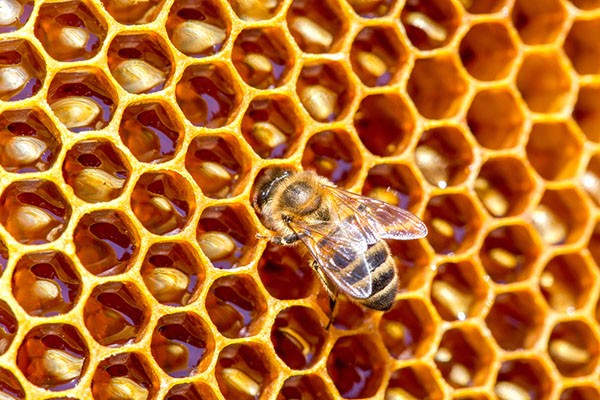 There are approximately 25,000 species of bees worldwide, with about 4,000 species living in the United States. Some bees—such as honey bees and bumble bees—live in social colonies, but most are solitary. Bees play a large ecological role and are important to many processes in nature.

Despite their prevalence, there are many misconceptions about bees and their stings. Knowing these basic bee facts should dispel the myths and help you better understand bees and how to appreciate and respect them.

Not all bees can sting. For example, male bees cannot sting. The stinger, or sting, is a modified egg-laying device, therefore only females have them. However, despite having a stinger, the females of many bee species actually cannot sting. Bees tend to sting to defend their nest, so most bees won’t sting unless they are provoked or feel threatened.

Honey bee workers can sting other insects repeatedly. However, barbs in their stingers get caught in the skin of the animals they sting, especially mammals with thick skin such as humans. Removing the stinger is fatal to the bee, so it dies afterward.

If you’re not allergic to bee stings, the average person can tolerate 10 stings per one pound of body weight. Most adults can tolerate more than 1,000 stings. 500 stings may be fatal for children. Consult your doctor if you have questions or concerns about bee stings.

Source: The Merck Manual of Diagnosis and Therapy

Bee stings can be deadly to people who are allergic to them. However, fatal bee stings are very rare. From 1999 to 2007, the Centers for Disease Control reported 509 deaths from wasps, hornets or bees stings, and fewer than 1 percent of children and 3 percent of adults are prone to anaphylaxis, the often deadly allergic reaction some experience in response to a sting.

Although wasps belong to the same order of insects, they are not bees. Bees are vegetarians, collecting pollen and nectar for their young. Wasps are carnivores, and some species can be very aggressive, especially if you disturb their nests. Bees are usually non-aggressive, with the exception of Africanized bees, a species not commonly found in the United States.

Bee stings produce different toxins than wasp stings. Therefore, someone may be allergic to bee stings but not wasp stings, or vice versa.

7. Bee stings can be used to treat arthritis symptoms.

There isn’t enough scientific evidence to support this claim.

Less than 5 percent of bee species make honey. Only honey bees and stingless bees produce enough honey to make it worth harvesting. Bumble bee hives may have a small amount (one to two teaspoons). Bumble bees are annual, not perennial, so they don’t need to produce a lot of honey to survive the winter.

9. Most bees live in hives.

Only social bees live in hives. 10 percent of bee species are social, and only a small percentage of them build hives. Most bees are solitary, living in individual nests tunneled in the soil or in tree trunks.

Honey bee, bumble bee and stingless bee worker bees (females) work very hard. However, many males don’t do any work in the nest. Females of the solitary bee species may only work for a couple weeks.

Solitary bees live only a few weeks—just long enough to mate, build nests and produce offspring. Honey and bumble bee workers and males live about six weeks. The workers spend half their time working on the hive and the other half foraging for pollen and nectar. The queens live longer. Bumble bee queens live up to one year, and honey bee queens can live up to four years.