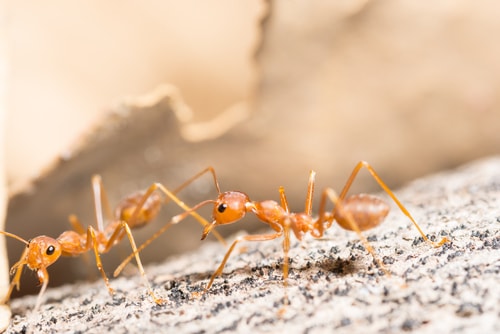 The U.S. Department of Agriculture Animal Plant Health and Inspection Service now enforces a federal quarantine and regulates interstate movement of items that could harbor fire ants, such as nursery items, sod, hay, straw and equipment that is used to move soil.

In some states, species of native fire ants are more common than imported fire ants. If you are interested in determining if your ant infestation involves imported fire ants, your local Cooperative Extension program may be able to help you identify which species you have.

BIOLOGY OF THE IMPORTED FIRE ANT
Imported fire ants are omnivores, hence they eat both plant and animal products (e.g., items in trash cans, grease bins, insects). Since imported fire ants eat arthropods, they can reduce other pest species, such as ticks, chiggers and roaches, as well as crop pests such as boll weevils and caterpillars.

Imported fire ants are social insects and can either have one queen or multiple queens. Differences between these genetic forms can influence control decisions, hence, it is important for pest control professionals to identify the ant species that are present in order to customize the pest management approach.

WHAT DO FIRE ANT MOUNDS LOOK LIKE?
As ants build their nests, they aerate the soil, and this can be beneficial to some degree. The mound of imported fire ants does not have an entry point in the center like other types of ants. Underground tunnels leading to several surface holes provide entry and exit points for the imported fire ant, and these holes may be visible in compact soil types. The height of the mound depends on the soil type (e.g., mounds in clay are taller than mounds in sand) and can be up to 18 inches tall. In some instances, imported fire ants can be found nesting inside walls.

WHY DO WE WANT TO GET RID OF FIRE ANTS?
Mounds of imported fire ants cause damage to lawns and can also damage lawn equipment. In some areas, heavy infestations of these ants can damage electrical wiring as the ants chew on wires.

Fire ants can latch onto victims with their mandibles while repeatedly stinging and injecting venom with poison glands. The venom contains an alkaloid substance called Solenopsis A (a piperidine, related to an ingredient in black pepper). Fire ant stings can cause painful, itchy pustules that may become infected if not cared for properly. In some people, severe allergic reactions can result from stings from imported fire ants.

If you are bitten/stung by fire ants, quickly brush off the ants. Antihistamines may be used to control swelling and other minor allergic reactions. A medical professional should be consulted if severe allergic reactions are experienced, such as chest pain, nausea, sweating, breathlessness or severe swelling.

HOW CAN FIRE ANTS BE CONTROLLED?
An integrated pest management approach should be used to control imported fire ants. The degree and location of infestation will inform the management plan. For instance, public areas, such as school playgrounds or parks, may require more intensive control measures than an agricultural site, such as a pasture.

Since the early 2000s, parasitic phorid flies have been used as a biocontrol agent for fire ants. These flies lay eggs on the ant and when phorid fly larvae hatch, they feed on the hemolymph (insect “blood”) and tissues in the fire ant head (causing death to the ant).

It is a common misconception that the ingestion of grits will kill ants (unless the grits are used as a delivery system for an insecticide). No one should try to pour gasoline, ammonia or other types of chemicals into ant mounds, as these products can be dangerous to handle and can also damage the environment.